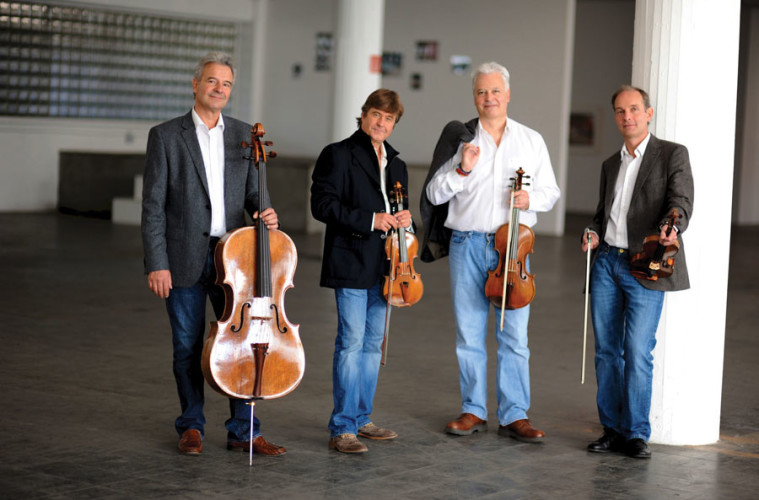 The Auryn Quartet Celebrate a Lifetime of Making Music Together

The Auryn Quartet Celebrate a Lifetime of Making Music Together

The audience this spring for the Auryn Quartet’s sold-out performance of Beethoven at the Leo Rich Theater in Tucson, Arizona, was determined to keep the ensemble onstage—an insistence that was rewarded with a Haydn quartet encore.

The two-hour appearance for the Arizona Friends of Chamber Music sped by—the lightness and articulation of Beethoven’s Quartet in A major, Op. 18, No. 5, and the Quartet in B-flat major, Op. 130,with “Grosse Fuge,” Op. 133, captivated and energizied listeners. Still, it wasn’t just Auryn’s masterful musicianship that had admirers on their feet, not yet ready for the evening to end—or to feel relaxed enough to playfully applaud first violinist Lingenfelder simply because he had finished tuning his Stradivari before launching into the Haydn.

More than warm Southwestern hospitality, this kind of spontaneous, friendly tittering has happened to Auryn before, most recently at the Frick Collection series in New York, where the group performed prior to its Tucson engagement. As New York Times critic Vivien Schweitzer noted, “There was a brief delay after Mr. Arndt realized he forgot his music and went backstage to retrieve it, eliciting giggles from the audience.”

A sense of intimacy exudes from the multi-award-winning quartet, creating a casualness not often expressed in this refined setting. But to hear Auryn play is to experience what chamber music is at its core: the music of friends—and in this case, the music of close friends who have played together and stayed together, through grand times and worrisome ones, without a change in personnel since the group’s inception 34 years ago in Cologne, Germany.

“We know it’s special that the four of us are still together. We respect each other,” says violinist Oppermann during an interview after their rehearsal for the upcoming concert, their second with the Tucson-based Arizona Friends of Chamber Music in four years, adding, “It’s about the music, not personalities.”

Yet that camaraderie almost came to an end when one of the members fell gravely ill two years ago. The Roots of Auryn

It was the music that brought the four together initially. Already accomplished young musicians, then in their 20s, Auryn co-founders Eaton and Lingerfelder met at an orchestral festival in Aberdeen, Scotland. “On the side we were playing chamber music,” says Eaton, adding of his musical encounter with Lingerfelder, “I knew something was there—we jelled.”

When Eaton suggested that he and Lingenfelder start a quartet, Lingenfelder got in touch with Arndt, who he’d known since their teen years playing with the German National Youth Orchestra, and with Oppermann, who had heard Lingenfelder play a Mendelssohn quartet and remembers thinking, “That’s a violinist!”

The deal was sealed at their first rehearsal in Cologne. “It was March 8, 1981. I remember because it was my father’s birthday,” Arndt says. “We played two pieces, and I knew something was there.”

This sentiment was echoed by all, with a sense of destiny tossed in. This was particularly true for Eaton, who between 1979 and 1981, at the invitation of conductor Claudio Abbado, was principal viola of the Orchestra Teatro alla Scala. “I gave up Florence for Cologne!” Eaton laughs.

They called themselves Auryn after the popular 1979 German fantasy novel, The Neverending Story by Michael Ende. In it, the seeker calls on the powers of a magic amulet called Auryn. “The amulet helps him fulfill his dreams,” says Arndt, adding what appealed most to the new quartet: “But it only helps if he goes for his inner dreams.”

As heady as early success was, the four musicians knew that if their goal—longevity as a chamber quartet—was to come true, they needed to take a step back from the limelight. “We very quickly had huge things to do,” says Arndt of their rapid-fire ascent, which also led to representation by coveted Columbia Artists Management. (They’ve been with the Tacet label exclusively since 2000.)

“We weren’t prepared. We had no experience being onstage. We had no repertoire.”

So they did what any serious musical talents would—or should—do: They took a sabbatical. True to the Auryn magic, it wasn’t just any break in the action, but one that further underscored the charmed nature of their union: They got to study with their idols, the Amadeus Quartet and the Guarneri Quartet. “The Amadeus were like parents, and we were the children,” Arndt recalls.

Between 1982 and 1987, the ensemble studied with the Amadeus in Cologne and with the Guarneri at the University of Maryland at College Park, where they spent two semesters learning from their mentors, but also with “free time to practice and play,” Arndt says. Free time included performing at the Schubert, Schubert, and Schubert Festival at Georgetown University’s Gaston Hall. Auryn remains the quartet in residence for the annual event. “We’ve played there for 25 years, every year,” Oppermann says.

“It was a dream to study with our heroes,” says Oppermann, whose Petrus Guarneri violin was played by the Amadeus’ Sigmund Nissel. It was also the Amadeus Quartet that inspired the four to pledge at the start that they would stay together as a quartet for 40 years—“to beat the Amadeus,” jokes Arndt, “who stayed together, I think, 39 and a half years.”

Today, with 34 of those 40 years in their pocket, Auryn can look back at a wealth of accomplishments. Says Oppermann, “We never thought about doing anything else, we just went for it. We were aware of taking risks, and we knew we’d take risks for the goals we tried to reach.”

Being mentored by their idols is among those goals reached, as well as performing with another hero, pianist Menahem Pressler. They’ve shared the stage with an impressive roster of international stars, and have appeared worldwide at venues of all sizes, including Tucson’s 500-seat Leo Rich Theater, Lincoln Center, Amsterdam’s Concertgebouw, and London’s Wigmore Hall, where they performed a complete cycle of the Beethoven quartets. The Auryn Quartet runs its own annual chamber-music festival, Incontri Internazionali, in Este, Italy. They are artistic directors of the Musiktage Mondsee (Mondsee Music Days) lakeside festival in Mondsee, Austria, and they are chamber-music professors at the Music Academy in Detmold, Germany.

As for milestones not imagined three decades ago, one is the completion of an ambitious goal to record all 68 of the Haydn quartets, realized with the 2010 CD set released by Tacet. Also noted by all as a milestone—reaching the point in their career when “someone lends you a very, very nice instrument,” says Oppermann, in his case the Amadeus Quartet, or, he adds, getting to the point in their career when, as he did, they could buy one of their own.

It’s been a whirlwind life for these musicians, who began their tenure together to seek what was important for each of them individually—to make beautiful music. “When we play together, if someone has a best moment, I can feel the pure energy,” says Arndt. “I like and respect my colleagues; they’re interesting people. I feel the three of them take music seriously, as I do.” That’s not to say they don’t disagree—they do, and they compromise, but not, says Arndt, when it comes to the music. Yet after more than three decades together, rough edges are fewer and farther between.

As Eaton notes, “We have the freedom now to just play, to follow the narrative of the music and let it come through. With experience and knowing the repertoire, it becomes a natural process, and we’re more relaxed, more natural.” In the past, the four spent most of their time together, on and offstage, but as they married, had children, and moved to different towns, that time has shortened to about six months, with 60 or 70 concerts a year, rather than in the 100s. “We don’t have to be a big success anymore,” says Oppermann. “We’re just happy to be doing what we do.” This is especially so today, two years after violist Eaton suffered a stroke. Now, fully recovered, Eaton plans to stop performing at the 40-year mark. “I want to spend my remaining years without stress. I love to meet people, I love bringing music to people, but the flying, the driving—for me, the stress has been tremendous.”

Although Eaton insisted that his colleagues continue performing during his recovery—and they did, for six months with violist Matthias Buchholz—his illness affected them greatly. “When Stewart came back,” says Arndt, “I felt very, very sure that I wouldn’t play with someone else [even if] I have to retire.” All agree, and also with Eaton’s assessment that he now has “a different perception of music-making. I feel it more. “My skin is thinner: Everything impacts me more, and that’s a good thing. I [experience] every concert as my last.”