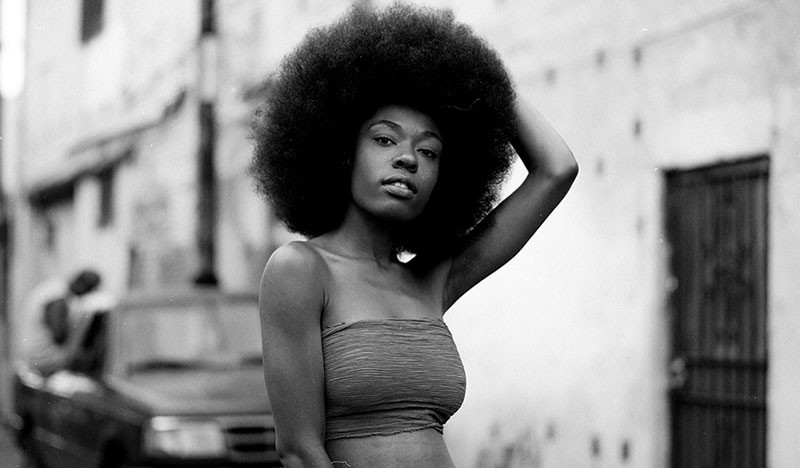 Against a shower of tinkling percussion, the camera advances ever so slowly through a West African market. We push past dangling fabrics and crates of eggs; women balance heaps of laundry atop their crowns. As a high-pitched violin riff yowls to life, a woman in white appears among the crush of wares. She drifts by piles of nuts and a riot of herbs. Soon, we see where the string riff came from: She dances on a burnt-orange dirt road, her violin in hand. As a thumping bass buzzes forth, she dances. And she sings—on the back of motorcycles, between schoolchildren, as a rooster goes about its day.

This is the first music video by Sudan Archives, an experimental violinist of heterogeneous influences. Her music, often trussed by looping and effects pedals, fuses folk, classical, jazz, electronic, R&B, and hip-hop elements. Despite her richly African folk–inflected sound and this video’s setting in Ghana, she is from Cincinnati, Ohio. Born Brittney Parks, (“like Rosa,” she’ll tell you), Sudan Archives moved to Los Angeles when she was 19. Even then, there was a fearlessness that still punctuates her sound. “I took my violin, one suitcase full of a bunch of clothes, and crashed with this girl that I met on Instagram,” she says. “It was kind of far out, but it worked.” In 2017, she released her six-track EP, dominated by thickly textured sound palates, elegant lyricism, and a rock star’s bravado.

First drawn to violin around fourth grade, Sudan Archives is largely self-taught; due to a lack of string programs in her schools, she mostly played in church. She relied on her sharp ear and often mimicked the radio. Along the way, she became infatuated with an African aesthetic. She adopted the nickname Sudan. It wasn’t until years later that she happened to discover that Sudan actually has a vibrant fiddling culture. It sent her on a deeper exploration, which resonates on her upcoming release.

I caught up with Sudan Archives when she was creating her first full-length album, due out in 2019. It promises her usual eclectic blend, but a lusher string presence.

Do you remember the moments you were first drawn to violin?

[My school] had this [Canadian] group called Barrage come and play a bunch of fiddle songs. They danced and clapped and played violin at the same time. It was really cool! [Laughs.] The music was really fast. I was like, “OK! This looks really fun; I want to try it.”

I remember the first solo violinist on TV that I ever saw—a little after the fiddlers—was Miri Ben-Ari, the hip-hop violinist back in the day. She contributed a lot to hip-hop music: Akon, Twista. She was my first example. You know how people have violins in hip-hop but you don’t really see the person playing? She was this really beautiful woman and you wanted her in your video. It made it more cool. My uncle sent me her album because he thought that was the only reference I ever saw of someone playing violin and making a living off of it, but wasn’t in an orchestra; she was kind of doing her own thing.

From there, how did you start learning?

An afterschool program. I feel like I was there for maybe two years; after that I went to two to three different schools. I was moving around so much, and the school programs didn’t really have orchestra. I was a little more advanced, but I wasn’t really learning anything new.

So, I kept playing in church. I taught myself how to play certain songs by ear. I was the only violinist there. That’s when I really started sounding good.

You’ve said you’re not as trained in sight reading and theory, but improvising and ear training is what many classical players are missing from their arsenal.

Yeah. I used to be really insecure about it. I used to talk to this one girl and say, “Oh, I just suck!” She’d say, “No, you don’t suck! You have a really good ear and you can make up your own ideas. I can only play certain songs really, really well, but it’s hard for me to create my own ideas.” I didn’t think about it that way.

Was that when you felt more assertive?

I got more confident because of the internet. Maybe it was just seeing other people around the world playing the violin in different ways—not just classically—that pushed me to keep doing what I’m doing and experiment more. In northern Ghana, there are these tribes that play an instrument called the hausa violin. It’s made out of a gourd. The bow and the one string are made out of horsehair. The way it sounds—wild and expressive—has this fiddle-roots thing to it. They’re playing these bluesy scales. I really liked those pentatonic scales.

There’s this violinist from the Czech Republic called Iva Bittová. Her performance is visual art. I’d look up live YouTube videos of her and the violin and people dancing in these weird suits. Just seeing the way that a person plays violin and is a one-woman or one-man band, it just made me feel that it’s not about having lessons since you were little; it’s about expressing yourself and finding inspiration.

I found out about so many different violin players. If you look up a video by Maarja Nuut, an Estonian violinist, it’s so crazy. She starts off with the violin loop and then she starts swaying back and forth, and the next thing you know, she’s spinning. She has on this dress. And she’s spinning and spinning and stepping at the same time. Her tapping starts to become part of the loop. I don’t know how she does that. It’s mesmerizing. I find a lot of interesting one-woman bands like that. The visual element is really important to me. Her stuff is hypnotic.

So I moved to L.A. and found out about all these people on the internet and that’s when I started producing and mixing it all together.

I started the YouTube search after going into a record shop and buying this album by
Francis Bebey, who was an African electronic pioneer. He was an ethnomusicologist. He wrote a book about all these stringed instruments all around the world. I would take the name of the instruments and try to find them on YouTube, because I wanted to see people actually playing them. And that’s how I started to find all these instruments. That led me to this ethnomusicologist from UCLA, Jacqueline Cogdell DjeDje, who wrote a book called Fiddling in West Africa.

What drew you to African fiddle?

It’s mainly violin and vocals and this call-and-response style. I thought, “OK, maybe this is what I need to be doing—but in my own way.” The music in northern Ghana, the kind of style was like the [Barrage] fiddle music. It’s all pentatonic and bluesy. It’s the way they deliver it. It’s just different. When I hear it, it makes me super nostalgic.

What are other elements of Sudanese fiddle music you like?

It’s a certain kind of rhythm they use. I don’t know what it’s called. It sounds marchy, you know? Very upbeat. I really love ouds—they use a lot of ouds in their music, too. I try to take my violin, pluck it, and make it sound like an oud. They’re always in this repetitive, pentatonic riff. The way they sing is not like pop-music vocals. It sounds strange to me, almost like a snake-charmer effect.

How did you start experimenting with the loop pedal?

When I moved to L.A., sometimes people would ask me to do shows—a girl had her own clothing store and asked me to play for the opening, or my friend had a birthday and asked me to perform. I thought, “OK, but what can I do that’s interesting?” I’d just loop a violin. That would be the show. Then I started incorporating electronic music because I wanted it to be a little more diverse. Eventually, I had a loop station and a drum machine and a vocal-effects pedal and I was just doing everything on my own.

At first it was really hard. I had stage fright and couldn’t even look at people. I kind of wanted to put all my gear on a table—and hide behind the table. But then I was like, “That’s kind of boring. If I came to see someone, I wouldn’t want to see that.” So I had to overcome stage fright.

Is that how you hit on your sound?

The goje players in northern Ghana, their violins sound like old whiskers, because of the way it is with the one string, or how old the instrument is. It just sounds kind of harsh. So I thought, “Maybe I can keep playing like that. And just own it.” Whenever I would play [like that], that’s when people would get the most excited, too. It made me want to be more aggressive.

You’re emulating a lot of folk influences, but you haven’t departed from classical. Why?

Even though it was for a little bit, I really enjoyed being in an orchestra. For some reason I felt like even though I strayed from the classical world, it’s always a part of me. I love Stravinsky and I just want my songs to feel like his movements. He’s inspiring because he was kind of an outcast. I don’t think people understood him back then, but now he’s a legend. I want to be like him. His music feels dark to me—intricate and beautiful at the same time. And I think that’s the route that my album is going toward.

Tell me about your upcoming album.

It’s more orchestral. The way I’m arranging the strings, I’m trying to really build a bigger sound. Stravinsky is how I want my music to sound, but with my style and the whole fusion thing I’ve got going on.

I’m a bedroom producer, basically. I’m used to doing everything in my room, in my headphones, by myself. But, I really am curious and just want to see what it’s like working with other people. I’ve been composing music and I usually take it to other people and get certain parts redone. I’m working with other producers, too. We’ll start with a violin loop idea and turn it into something.

I’m trying to make two songs a week right now. I already have 15. The goal is to make 60 and to pick from those. I just like giving myself high expectations.