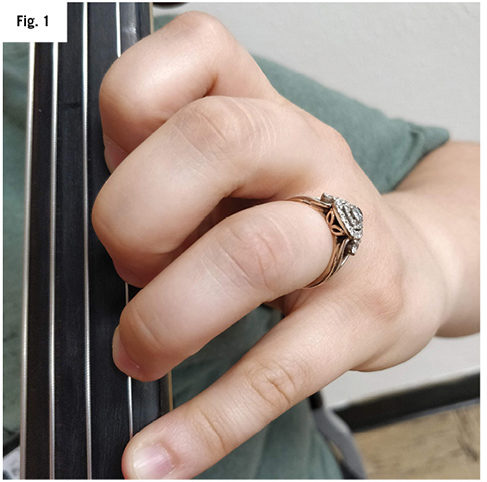 Olivia WiseNovember 21, 2018
String playing is the greatest. And Stringsmagazine.com is here to support you and the string world with fantastic content (like this story!) If you like what we do, please make a donation to support our work and keep the site running.

Duport was describing the common sensation of the third and fourth left-hand finger joints collapsing on the string. In the early-19th century, when the tenets of cello technique were still being codified, it was not unusual for musicians to attempt to place the left hand on the cello violin-style, with a pronounced inward slant to the hand now known as pronation. It was this slant that caused the inward finger-bend that Duport deplored. Later 19th-century method books suggest taking a “square” approach, with the palm more or less facing the neck of the cello, which at least stopped the third and fourth fingers from collapsing so much, but which caused other fingering problems.

Later still, after the innovations of Pablo Casals, who derived inspiration from observing violin technique, pronation made a comeback. These days, the concept is axiomatic in cello pedagogy. The only problem is that using it unvaryingly can cause collapsing and locking in the third and fourth fingers—and this applies to bowing technique as much as to left-hand technique.

What Exactly Is Pronation Anyway?

In anatomical terms, pronation occurs when the pronator teres and pronator quadratus muscles work together by pulling on the arm’s radius bone, causing the end of the radius to rotate around the ulna. In other words, it’s when the player rotates inward. The opposite motion, an outward rotation, is supination. This, standard pedagogy holds, is anathema to good technique because it makes for a cumbersome bow hold and illogical arm movements.

Take Another Look at the Third and Fourth Fingers

I hear many advancing string players complain that their third and fourth fingers are “weak.” I also hear students say they want to “build muscle” in their fingers. But according to the anatomists, we don’t have muscles in our fingers at all—unless you count the tiny arrector pili muscles that make the hair on your fingers stand up—and furthermore, the third and fourth fingers are actually our strongest. (Don’t believe it? Next time you meet a baby, get them to pull on one of your fingers.)

Just as Duport observed, the only thing that gives them the appearance of weakness is trying to push the string down with the fingers in a flat shape. What makes them come down flat instead of curved is excessive pronation. In the first image, the student’s left hand is too pronated for her hypermobile fourth finger to maintain a curved shape (see Fig. 1). In the second image, she has the same problem with a collapsing right fourth finger on the bow (Fig. 2).

A Pedagogical Cure-All That Went Too Far

Everyone who teaches cello will, at some stage, inherit a student who wants to hold the bow like a club using a terrible, supinated bow hold. It’s tempting to try to retrain the student by having him or her place the tip of the fourth finger on the stick of the bow, violin-style, so that the hand becomes very pronated. The thinking behind this pedagogy is that you can correct a bad habit through over-correction.

I caution against this, because it builds a new habit that itself has to be undone later. The student in the photographs had been instructed by a previous teacher to play this way, and as a result, the stress on her fourth finger caused it to collapse against the stick. Clearly, pronation is not the cure-all that it was hoped to be.

That’s not to say cellists should never pronate. Of course we should. Pronation is great for some things—extended fingerings in the left hand, and logical bow trajectory in the right. The problem occurs when the player tries to play in a “set” hand position, using the same pronated hand shape for every circumstance. When the left-hand fingers hammer down on the string from a “set” position, the cellist is doomed to excessive tension, poor intonation, and a percussive sound as the fingers smack the string into the fingerboard.

Cellists often spend hours practicing difficult technical exercises by Bernhard Cossmann, etc., thinking mistakenly that they need to build up their finger strength. In reality, they don’t need to be particularly strong. All they need is a way to use the natural weight of the human arm in moving from finger to finger on the string. The average human arm weighs 8–10 pounds, far less than the amount of weight needed to depress the string toward the fingerboard. By using the arm’s rotation, rather than the pronation-plus-hammers method, cellists can all achieve the facility they desire.

Start by playing a chromatic tetrachord (Ex. 1, below). Beginning with the first finger on the string, ensure the arm is pronated so that the palm of the left hand faces down to the floor. In a smooth, slow movement, rotate the arm so that the palm is more or less opposing the neck of the cello, and “walk” the arm’s weight through to the second finger. Continue the rotation of the forearm to walk to the third finger. Finally, slightly supinate the forearm to walk to the fourth finger. At all times, the fingers should remain curved, and the contact point between finger and string should be the tip of the finger, not its pad. The thumb can lightly graze the back of the cello’s neck, but always remain mobile as it gently opposes whichever finger is on the string. The third figure shows the student’s left hand as she practices this exercise (Fig. 3).

The “walking fingers” method allows players to use the whole arm to get from note to note, with the additional benefit of using the arm’s weight to depress the string rather than “pinching” the neck between fingers and thumb. It also facilitates wider stretches than the “set” position will allow for, especially in students with very small hands, such as the student pictured.

Roll On, Peel Off

You must also consider what happens when you play the chromatic tetrachord in descending motion. When you ascend the tetrachord, the downward rotation of the arm helps the fingers to “roll on.” Descending, by contrast, requires an upward rotation of the arm back to a pronated stance. It can be useful for crispness of articulation to take the fingers off the string with a slight plucking motion, as if “peeling” them off (Ex. 2).

Practicing this exercise on all strings and in all positions and registers of the cello enables the player to relearn fingering technique in a way that enables a comfortable angle for every finger. What’s more, she can easily move from finger to finger over wider intervals than she can with a “set” hand position, improving intonation and facility. In Exercise 3, observe how the “roll on, peel off” method enables cellists to play a whole-tone tetrachord with ease. The rotation of the arm means that the thumb, freed from the “anchored” position of old-fashioned technique, glides effortlessly to oppose whichever finger is on the string (Ex. 3).

With just a few slight adjustments to the amount of pronation used in bowing, you can solve the problem of tense, collapsing fingers once and for all. In Fig. 4, the student demonstrates how she changed her bow hand to make it more rounded and flexible. The first step was adjusting the angle of the bow hair vs. the string, since she had previously played with the hair practically flat. To change this, we turned the stick a little more toward her, meaning that the bow hair was facing toward the bridge. After this adjustment, her third and fourth fingers no longer overstretched to reach the stick.

Secondly, we decreased the amount of pronation she used when playing in the lower half of the bow, so that her third and fourth fingers could curve more, nestling gently into the rounded part of the frog. With her excess tension alleviated, the student now felt free to sink her arm’s weight into the string to produce a bigger, richer tone. She also reported feeling less physically tired after long rehearsals and practice sessions.

A Technique Change Everyone Can Master

Some cello techniques are legitimately difficult and take a long time to master. The beauty of this one is that it’s easy and can be accomplished by just about anyone, even beginners. Like many teachers, I used to put tape on the fingerboard of beginners’ cellos to guide their first steps in intonation, and sometime placed a velcro pad on the back of the cello neck to guide their hand shaping with the thumb opposing the second finger. I’ve now realized that these are unnecessary crutches, which furthermore build unnecessary habits to be broken later. Good ear training plus the “walking fingers” method can make for relaxed technique and good intonation from the very first stages of instruction—and are easy for more advanced players wishing to replace old habits with new, efficient skills.

The complete edition of the Care & Repair of Cellos series gives you a library of video and written instruction that will provide you with extensive knowledge that will help you understand your instrument and, in turn, be a more informed owner and user of stringed instruments and bows.