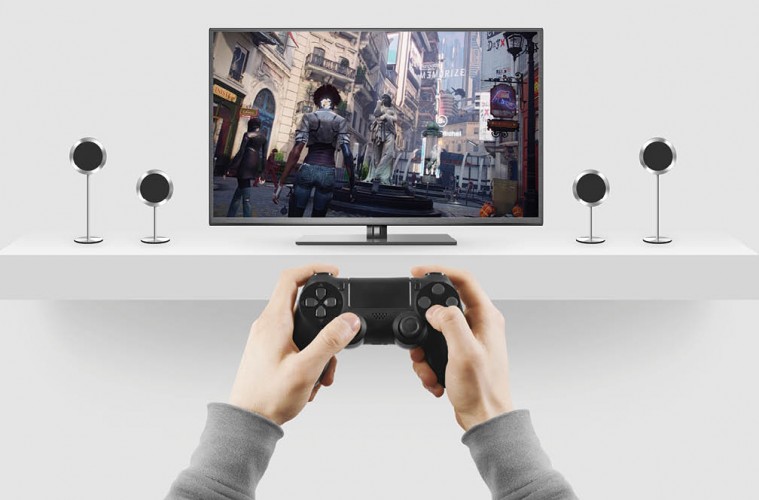 Top Video-Game Composers Talk Craft and Breaking into the Business You might associate video games with tuning out the world or shirking your responsibilities—a possible reason your homework was late, for instance. But over the years, what was once considered a frivolous  pastime has evolved into a respected form of storytelling, with musical scoring playing a key role.

The classical world has received the memo: The Berklee College of Music and the San Francisco Conservatory of Music offer programs specifically in video-game scoring. The London Philharmonic Orchestra, the Philharmonia Orchestra, the Seattle Sinfonia, and the Boston Cello Quartet have all lent their talents to video-game soundtracks. Hollywood heavyweights Hans Zimmer and Michael Giacchino have composed for video games, underscoring how the medium is not only widely accepted in pop culture, but has rocketed to new levels of esteem outside of it.

[String instruments] have the greatest range, both in pitch and playing techniques, of any instrument in the orchestra. They can provide a propulsive rhythmic engine, chordal accompaniment, soaring melodies, and flashy virtuosic passages impossible on other instruments

Two video-game composers, Clint Bajakian and Olivier Derivière, speak about the intricate, multi-faceted art of video-game scoring and how to serve the ultimate judge: the player. One might think writing a video-game score follows in the same footsteps as scoring a movie. But the inherently interactive element of video games requires composers to be familiar with gaming territories and to have a keen mind for problem solving.

Derivière, who fell in love with video games as a child and is still a self-described “hardcore gamer,” says what makes a great video-game composer is knowledge of game-play mechanics. “It’s a new world. It’s nothing that you could have for movies. It’s something completely different,” Derivière says of the industry in a Skype call from his Parisian studio.

His space is decorated with vibrant posters of past game projects. Derivière stresses that he focuses intensely on the game-play experience throughout the scoring process.

He constantly plays a game as it is developed, staying close to the team during what is sometimes a multi-year endeavor. Another goal is to stir a deep response through music. “The way I score a game is emotionally. If it’s a narrative-driven game, I score the story but also I do score the system,” he says. Derivière, who began studying classical percussion as a child, studied at the Conservatory of Nice, in France, and at the Berklee College of Music. He has also scored music for animation and films but is known for his award-winning work on several video games.

“Since I am very passionate about video games, I want to push the boundaries,” Derivière says. “I want to push how the music should react to the game, both artistically and within the game-play mechanics.”

For the 2013 cyberpunk sci-fi game Remember Me, he electronically manipulated a live orchestral score to emulate the game’s mind-bending concepts of technology and memory manipulation.

Constantly checking that music seamlessly aligns with how players may act is also something Bajakian, a video-game composer since the early ’90s, prioritizes. Like Derivière, Bajakian also used films as a jumping-off point for elucidating just how complex his job can be.

“Film scoring is, frankly, a simpler art form, because you have a very definite end point in the linear medium and a definite outpoint for each cue,” Bajakian says from his car one afternoon, on the way to his Marin County, California, home. He also stresses that video games are more about player experience; as they go from one conflict to the next, or as tension ebbs and flows, the music should reflect that.

“The great majority of in-game music, you’re really doing a lot more cerebral thinking and verbal collaboration with others, asking questions like: What is the game play like? How long might someone be stuck in this area trying to solve this puzzle? What role do you want the music to play? Should it be kind of a background emotional, subliminal element, or should it be more foreground and attention-grabbing and mood-setting?”

Bajakian studied classical-guitar performance at the New England Conservatory of Music, and, realizing he wanted to compose, earned a master’s degree at the University of Michigan. Since moving to Northern California to work at LucasArts, he’s worked at Bay Area Sound, Sony PlayStation, and Pyramind Studios, gaining experience in myriad aspects of sound and video-game production. He pinpoints the two pillars of video-game composition as creating well-conceived music and knowing how to best incorporate it. He says many developers fall short of that second pillar. He insists there’s a lot of elbow grease and trial and error as composers look for “hooks to hang your hat on,” as he describes. “How do we translate the fact that you’ve just secured your objective to the game, you blew up the big ammunition depot or something?”Bajakian also stresses that video-game scores often develop concurrently with the graphics and other technical aspects, where movie soundtracks are usually placed in post-production. In games, music is essentially another layer of code that stacks together with the software’s many assets.

“So there’s a lot of intelligence and a lot of collaboration at that phase among programmers and scripters and level designers and the composer,” he says, adding that it’s essential to be aware of textural and rhythmic relationships, as well as key relationships within pieces of music, especially when the context changes.

He recalls one example of an awkward transition in a video game he played once for fun. As the player moved through a jungle, the music would abruptly crossfade from peaceful to tense and malevolent when the player passed within the specified radius of an enemy. The problem, Bajakian explains, was there was no musical relationship between the two pieces, creating a jarring, distracting effect. Tapping into a New Project

For Derivière, the best way to conceive a new video-game score begins with meeting the creative director and plunging into the story-world. “Generally what I do is say, ‘Listen. Let’s not talk about music. Let’s just talk about the game. Let’s just talk about what you want for the player to feel, to get,’ and then I construct all the ideas around this conversation, and start creating the music out of those ideas,” he explains. For a new project, Derivière was inspired by the game’s story- world concept: The setting is a futuristic Mars where its inhabitants must modify junk to survive. “So I said, let’s make music out of junk,” Derivière says. The soundtrack incorporates PVC pipes as instruments, a concept popularized by musician Nicolas Bras.

Derivière insists on using high-quality live performers. He’s worked with a string quartet from the Boston Symphony Orchestra, the Boston Cello Quartet, the Brussels Philharmonic, and the Children’s Choir of the National Opera of Paris, to name a few.

He’s not sure if incorporating high-caliber musicians will automatically convert gamers—many of whom are teens—into classical-music aficionados.

But he asserts that having a high-quality score can make gamers “normalized to this quality of performance,” and that they might subconsciously come to appreciate the integrity of quality instrumental music.

Like many other composers, Bajakian was at times tasked to score within an existing zeitgeist. He’s worked on multiple games in the Star Wars universe and on three Indiana Jones games.

“If you’re scoring Indiana Jones, people are going to want to hear that main theme,” he says, adding that it works great as a flourish after a victory.

“At the same time the majority of the scoring needs to be original.” He had to immerse himself in the sophisticated, intricate brass-and-woodwind style of John Williams.

Afterward, he turned away from the source material in order to write his own compositions.

Both composers describe strings as significant assets to any score. Derivière noted that string instruments resonate with the human soul, adding that he considers the cello to be the closest instrument to the human voice.

“When I compose for strings, I always try to surprise the musicians so they feel more engaged. Working with the Boston Cello Quartet or the Boston String Quartet was an amazing experience, as these musicians are world-class performers and they play on such incredible instruments,” he recalls. “I remember my recording engineer being blown away and asserting that only there we could get such textures and expression.”

Bajakian says that many scores can overuse bolder instruments in brass and percussion sections to create excitement. But, from a musical standpoint, “good strings writing is indispensable to a great score,” he asserts.

“Strings are really the main element of an orchestral score—I think of it as the ‘cradle’ of the orchestra. They have the greatest range, both in pitch and playing techniques, of any instrument in the orchestra. They can provide a propulsive rhythmic engine, chordal accompaniment, soaring melodies, and flashy virtuosic passages impossible on other instruments.”

Breaking into the Business

“It’s a very competitive world and it’s very difficult to break through,” Derivière says of the industry.

Despite his many accolades, he admits he’d be thankful if he was still finding work five years from now. A great video-game composer has to have a sense of team spirit, he adds. Bajakian, who is a professor of technology and applied composition at the San Francisco Conservatory of Music, notes that new software has made video-game scoring easier than ever before—acquainting oneself with it can increase salability on the job market. Other than that, knowing the industry is vital.

“Be literate; read trade magazines. Watch game plays on YouTube. Network, keep notes. Don’t ever underestimate the importance of musicianship,” says Bajakian, who continues to play guitar. “Only go into this field if you really love this stuff.”