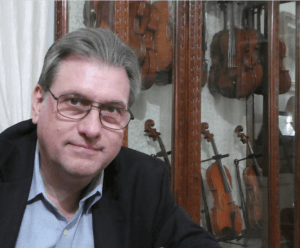 Philip J. Kass is a respected expert, appraiser, consultant, and writer about fine classic stringed instruments and bows. From 1977 until 2002, he was an associate of William Moennig and Son, Ltd. of Philadelphia, where he handled many of the world's great string instruments.

Since 1981 he has been a frequent lecturer for the Violin Society of America, the American Federation of Violin and Bow Makers, and the British Violin Makers Association. A member of the Violin Society of America since 1975, he has served on its board of directors since 1976, as vice president from 1985 to 1997, and as president from 1997 until early 1999.

Among his many publications have been essays in The American Violin; Joannes Baptifta Guadagnini fecit Parmæ ferviens ... - Masterpieces from the Parma 2011 Galleria Nazionale Exhibition; Bottega Italiana, the book accompanying the 2013 exhibition in Cremona; and a monograph on British bowmaking, published by the Violin Society of America in 2017. An upcoming book on the violin makers of Mantua is projected for 2022. He appeared in the 2013 documentary Violin Makers – The Renaissance of Italian Lutherie. He has also published a wide variety of articles on both violin and bow makers in Strings, The Strad, The Cozio Carteggio on Tarisio.com, and the Journal of the Violin Society of America.

Mr. Kass joined the faculty of the Curtis Institute of Music in 2006.

A Closer Look at Historical Bows and Some Eccentric Frogs

There is something lovable about unusual bows, as strange as they may be.

What sorts of instruments manage to exhibit investment growth? Let’s talk about investing in that violin with this player's guide to instrument appreciation.

Untangling the Dodds: Re-evaluating Historical English Bow Making, In All Its Complexity

By Philip J. Kass | From the November-December 2020 issue of Strings magazine My first article for Strings, back in the late 1990s, was about English bows a... Read More...

By Philip J. Kass | From the July-August 2020 issue of Strings magazine The Italian city of Mantua today seems like a small town. It’s not on any of the hig... Read More...

By Philip J. Kass There’s a famous tale that everyone in the world of violins eventually learns. This tale involves the competition for the design of the vi... Read More...

By Philip J. Kass In 1772, a young violin maker arrived in London with his family to practice his craft. He was 38 years old and had worked in many cities; his ... Read More...

By Philip J. Kass All Images Courtesy of Tarisio Writing about workmanship is fraught with difficulties, not least because of the chances that language does not... Read More...

Vincenzo Panormo’s Effect on the Trade, the Craft & Place in the Modern Market

By Philip J. Kass The most lasting influence of Vincenzo Panormo on the violin world was in his introduction of the Stradivari model into French and English vio... Read More...

Giovanni Battista Guadagnini’s Work Alluded to the Violins of Past Masters, But in a Style all His Own

By Philip J. Kass Ever since old violins first became cherished, we have formed romantic ideas about them and their makers. The truth of the matter is far more... Read More...

Bow Bugs: How to Know You Have Them and What to Do If You Find Them

All Motions Great & Small: How to Practice String-crossing Technique for Bariolage