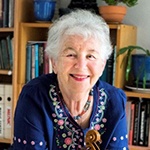 Mary Nemet's career has included roles as the National Reviews Editor and AUSTA Stringendo magazine. She is also a violinist, soloist, chamber music and has performed in orchestral concerts worldwide.

Jean Sibelius' Malinconia for cello and piano rewards the players with a soulful opening cello cadenza and a hauntingly beautiful melody that brings out the cello’s most captivating tonal qualities.

Many young violin students will be familiar with Joachim Raff’s Opus 85, not realizing that it is the third of six equally enchanting pieces of Opus 85.

Grazyna Bacewicz's "Easy Pieces for Violin & Piano," penned in 1945—five in each of two books—is ideal for the beginning years of lessons.

Print Review: Eduard Franck’s Sonata No. 1 for Violin & Piano in C minor Delivers a Wealth of Thematic and Rhythmic Ideas

Eduard Franck’s fellow composers held him in high esteem. His Sonata No. 1 for Violin & Piano in C minor delivers a wealth of thematic and rhythmic ideas.

In this fastidious edition of Clara Schumann’s "Three Romances" from Bärenreiter performers will find a wealth of information on these appealing works.

Zemlinsky's String Quartet No. 2, Op. 15, is end-of-century Romantic music on a grand scale and remains one of his most frequently performed works.

In Richard Strauss' Sonata for Cello and Piano in F Major, Op. 6, Henle has once again produced a meticulous edition.

First appearing in 1796, these delightful duos are ideal for sharing a rainy Saturday afternoon with your playing buddy, or as a post-lesson treat.

Be Kind to Your Tendons: 6 Low-Tension Exercises for Beleaguered Cellists