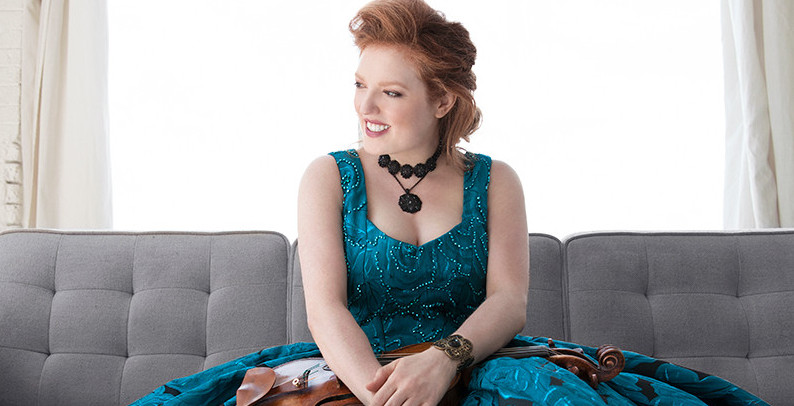 Olivia WiseDecember 10, 2018
String playing is the greatest. And Stringsmagazine.com is here to support you and the string world with fantastic content (like this story!) If you like what we do, please make a donation to support our work and keep the site running.

Even for Rachel Barton Pine—who has used the violin soloist’s bully pulpit to promote the pioneering American violinist Maud Powell, an original edition of Bach sonatas and partitas, and an ongoing heavy metal outfit (Earthen Grave)—her latest project stands to be particularly wide-ranging in its impact. Under the banner Music by Black Composers (MBC), Pine plans to highlight more than three centuries of music by composers of African descent that has been largely forgotten or sidelined from modern concert stages.

The centerpiece of the multi-pronged effort, which launched in October, is a projected eight-volume series of sheet-music books for violin. Each edition will be supplemented with downloadable reference recordings by Pine and pianist Matthew Hagle, along with other background materials. Future volumes are expected to focus on viola, cello, and other instruments. The first volume, published by LudwigMasters, contains 23 beginner-level arrangements for violin and piano or violin duet, spanning the years 1767–2014. The music is by black composers from North and South America, Europe, Africa, and the Caribbean.

Many of the featured composers found ways to work within a white-male canon, in spite of extreme prejudice or little contact with world music capitals. Pine cites Francisca “Chiquinha” Gonzaga (1847–1935), an Afro-Brazilian composer who wrote over 2,000 pieces, from polkas and tangos to serenades and opera. She became the first woman in Brazil to conduct an orchestra and was active in the country’s abolitionist movement. “She married young to a guy her parents wanted her to marry and who didn’t want her to compose,” Pine says in a phone interview from Rio de Janeiro, where she is on tour. “Even though it was scandalous at the time, she divorced him so that she could live the musical life she needed to live.”

Gonzaga is well-known among Brazilian audiences but remains utterly obscure in North America. Similarly, Pine drew blank stares when she recently introduced a piece by William Grant Still at Domaine Forget, the Quebec music festival and academy. “In the US, you think of William Grant Still as one of the few black composers that people have at least heard of,” she notes. “But there in Canada, among the public, the faculty, the students—nobody had even heard of him. They were like, ‘Wow, what a great piece.’ So that was eye-opening.” Still’s Suite for Violin and Piano (1943) is one of 11 works by black composers on Blues Dialogues, a recording that Pine and Hagle will release on Cedille Records.

Besides recordings and sheet music, Pine plans to launch an online database at musicbyblackcomposers.org with the goal of comprising all composers of African descent, living and deceased. Music will be searchable by style, length, gender, and other parameters, and users will find links to download the sheet music. Naturally, Pine isn’t working alone. Through her nonprofit Rachel Barton Pine Foundation, she has hired editorial and research consultants who have helped gather and prepare more than 900 works by over 350 composers. (The database will start on a smaller scale when it launches, likely in late 2018.)

“The main purpose of the series” says Pine, “is to inspire and encourage [more] African-American or Afro-European or Latino violinists to hopefully become part of classical music’s future by recognizing that they are actually part of classical music’s past. The secondary purpose is to diversify everybody’s repertoire so that students of all races and ethnicities can play this wonderful music.”

The project arrives at a time when long-neglected black composers, notably Florence Price and Julius Eastman, have enjoyed modest revivals through recordings and on some leading-edge orchestra series. This year, the Pulitzer Prize for Music was awarded to hip-hop musician Kendrick Lamar. But Afa S. Dworkin, president and artistic director of the Detroit-based Sphinx Organization, says there is a need for pedagogical materials highlighting black and Latino composers.

“This has the potential for being extremely useful and transformative for the field,” says Dworkin, “not just in terms of pedagogy, and for our teaching artists, but also in terms of the development of young people. This would provide exposure to music which I’m pretty sure [students] wouldn’t even know exists.” (Pine sits on Sphinx’s board of directors.)

he MBC project raises questions of how to introduce a diverse repertoire rooted in legacies of oppression. Some of the composers in Volume One rose from slavery, including Basile Barès, from Louisiana, and Thomas “Blind Tom” Wiggins, from Georgia. Ignatius Sancho was born in 1729 on a slave ship off the coast of Guinea, was taken to England, and eventually became a published composer and writer and possibly the first black person to vote in a British election. The first volume includes his jaunty “Duchess of Devonshire’s Reel,” “Marianne’s Reel,” and other pieces.

Megan Hill, an ethnomusicologist who serves as MBC’s managing editor, says some difficult curatorial decisions have emerged, such as how, or whether, to include minstrel songs. She cites Horace Weston (1825–90), an American banjo virtuoso who performed in minstrel shows. The first volume features an arrangement of his banjo duet, “The Birthday Party Waltz.” “We have a bio and we explain to the students what minstrel shows were and what was negative about them,” she says. “But there’s also the fact that they were one of the only opportunities for African-American performers to have a professional career.”

While the series will include compositions based on spirituals and ragtime (including Scott Joplin’s “The Entertainer”), many works don’t necessarily reveal an ethnic heritage. Indeed, Pine says that some could pass for French conservatoire pieces. “A lot of the music that we found, whether it was by Blind Tom or the Chevalier de Saint-Georges, is just beautiful music,” Pine says, using the noble title given to Guadeloupe-born composer (and champion fencer) Joseph Bologne. “But what I learned quickly is that you can’t pinpoint the idea that black music is like ‘X.’”

Pine, who grew up in Chicago listening to her parents’ blues records, says she conceived of MBC in 2001, four years after making a recording of concertos by 18th- and 19th-century black composers. “In 1997, I was not on the forefront of black music research,” she says. “I made this one cool album and that was about the extent of my knowledge of the repertoire.”

But people kept asking Pine where they could find study materials. Over time, she formed an advisory committee of scholars and string players with expertise in the African diaspora. It includes University of Michigan musicologist Mark Clague, who writes the forward to Pine’s Blues Dialogues recording, and Danielle Taylor, a violinist who contributes an article on famous black leaders who were also violinists (from Frederick Douglass to Louis Farrakhan). The Suzuki literature is used as a kind of skill-level yardstick, with the first volume corresponding to the first two books in the Suzuki method.

“My own teaching experience doesn’t extend to the Suzuki books one and two level,” Pine says. “That’s such a specialized skill so I recruited colleagues who are experts in teaching beginners to help me decide, ‘Should this be a slur or not? Should I use open string or fourth finger?’ All of these little editorial decisions make sure that it’s appropriate for a small child.”

Pine’s violinist daughter, who is six, has also served as a one-person focus group. She grilled her mother about the inclusion of women composers, for example, and has tried her hand at Latin-American and African rhythms. “It’s been wonderful to see her count two against three, for example, which she wouldn’t have been exposed to otherwise,” says Pine. A timeline poster and a coloring book of black composers are also in the works, aimed at showing young students black role models.

Having previously led tribute recordings to the boundary-breaking Maud Powell (1867–1920), Pine recognizes the hurdles in promoting work far outside the canon. She therefore hopes to give concert programmers multiple on-ramps. “Even if a particular community is resistant to contemporary music, well, there’s plenty of historical music by black composers,” she says. “You can play Florence Price, Samuel Coleridge-Taylor, Saint-Georges—all Classical, Romantic, and early-20th-century tonal music. You can diversify your repertoire without doing anything modernistic and challenging if that’s your hurdle.”

A larger goal is to help musicians build ties to their communities. “It’s about making sure our concert repertoire reflects the whole experience,” says Pine. “It’s not about some kind of musical affirmative action. If your series or orchestra is in a community with a certain demographic population, then you ought to be doing more to have music that might reflect their experiences.”