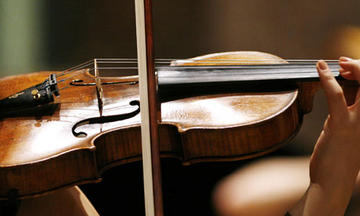 How to Find the Best Warm Up

Learn a 10-minute routine for cellists and adapt it for violin, viola, and bass

Hardly any aspect of string playing is more ignored than warming up. Some players barely do it at all before a performance; others have developed a warm-up routine and can use it to get ready for a concert in only 10 minutes or so, but it’s generally something they’ve figured out on their own.

“Strange, but I never had teachers actually say what they did to warm up in extenuating circumstances,” says cellist Harry Clark, artistic director of Chamber Music Plus Southwest. “All of them pretty much thought you should be able to go at a moment’s notice, which I do agree with, mostly.”

Even if you’re not facing “extenuating circumstances”—having to perform after not being able to touch your instrument all day because of travel or other complications—warm-up routines for normal conditions have not traditionally been part of the music curriculum.

“I don’t think that many string teachers have taught warming up as a science in itself,” says Ali Kavadlo, principal violist of the Charlotte Symphony. “I think that wind players have a much more systematized warm-up routine than string players do.”

First, it gets your fingers and hands limber and ready for work, just as you might do some muscle stretches before running or weight lifting.

Second, warming up refamiliarizes your left hand with where the notes are on the strings, and gets it properly set and ready for the fine-muscle movement required for trills and fast playing.

“The bow generally gets short shrift in the warm-up scenario, and considering that it does 80 percent of the work, this does not make sense” Clark warns.

Nevertheless, when people—including Clark—talk about warming up, they’re usually focusing on the left hand.

“The warm-up is as individual as the player,” adds Clark, “and what might work for me would be anathema to the next guy.” So keep in mind that you’ll want to experiment and find a routine that works for you.

But here’s some advice that will help you think it through.

Warming up doesn’t have to take a long time. Some orchestral musicians, in particular, go at it for as much as half an hour, but at that point it’s more like practicing than warming up. Your own routine needn’t take longer than 10 or 15 minutes.

Violist Kavadlo says that a quarter-hour of warming up before a concert is normal for her. Some of her colleagues, she says, literally warm up their hands by running warm water over them when they arrive at the hall during the winter.

Others don soft gloves with the fingers cut off, warming the hands, but allowing the fingers free movement.

Players who have suffered from tendinitis or elbow or shoulder problems should stretch even before they take their instruments out of their cases. It’s especially important to get the rotator cuff ready; that’s the site of a lot of trouble.

Your physician can introduce you to good, safe arm and shoulder stretches if you need them.

Kavadlo gets down to business by stretching her hands: she opens them slowly, stretches the fingers completely out, then slowly draws them back into a ball, repeating this sequence several times. Next, she slowly moves her wrists in circles to stretch them, too. Then it’s back to the fingers, curling and then stretching each finger out, one at a time, very slowly, to get the hand limbered up.

Now she’s ready for her instrument.

The idea throughout these warm-ups is to avoid working the left hand too hard; get it ready, but don’t tire it out.

Kavadlo begins with a slow trill exercise, one string at a time. On one string, she’ll move her first finger up and down slowly, using minimal pressure. Then she does the same with the second finger, then the third and fourth, and then on to the next string.

She then sometimes runs through some of the much-hated Sevcik etudes, not interesting musically, but good for working on a variety of finger patterns. More often, Kavadlo comes up with her own patterns, but in either case she goes through five or six patterns in major and minor, starting on the lowest string and going up to the top and down again.

“I do this very slowly and evenly with minimal pressure, and no vibrato,” she says. Then she’ll try different combinations of rhythmic patterns, always slowly.

Agreeing with Clark that the bow arm is neglected in warm-up routines, Kavadlo notes, “I always use long bows to warm up my right arm, long slow bows, and slurring everything very evenly.”

After about five minutes of this, she does several three-octave scales, slowly at first and gradually getting faster. She does major and minor scales (but only a few), starting with long individual notes, then slurring two notes, then three, then four, getting faster along the way.

“I’m holding the notes very long, without vibrato, getting a nice, even tone and working on intonation,” she says. This takes another five minutes or so.

“After I’ve done all that, the next thing would be to go over passages on the concert [music] that have technical difficulties for the left hand or even the right hand, doing them slowly in different rhythmic patterns, and getting them up to tempo.

“That’s usually about all I need to be ready to play,” Kavadlo declares. “I don’t want to exert all my energy on warming up.”

Cellist Clark seems a little ambivalent about warming up. “It sometimes is very good not to warm up, and play the repertoire first,” he says. “This will expose the stuff not ready for prime time in a way nothing else can.”

Be that as it may, Clark has some good advice specific to cellists, which other instrumentalists may adapt as they see fit.

“If I had but 10 minutes,” he says, “I would take five of them doing fifths (starting with C—G on the open strings), then octave C-C, and then the fourths.

“So fifths, octaves, fourths, and then jumping octaves: the low C-G, octave higher the next three intervals, octave higher, etc. Then C#-G#, ditto.

“Keep the bow on the bridge, long, slow, drawn-out. This exercise sets the left hand and the bow, as does double-stopping, which helps the bow feel more than one string at a time.

“When the bow is not ‘set,’ the left hand feels out of whack.

“Again, bow as close to the bridge as possible, but this time play softly. That’s hard to do near the bridge, but greatly advantageous in setting the bow.

“If I have a couple more minutes, I do the Bernhard Cossmann double-trill exercises, slowly and with care not to tighten. Also very good, in János Starker’s book on technique there is a pull-out. It’s a combo of every interval to be found in an octave formed by thumb to third finger.

“All this is excellent for the setting of the hand. Also, double-stops are great for the bow, and if the bow is near the bridge, mezzo-forte, the bow will be set, too.”

So there are some ideas to get you started on your own warm-up routine. But this talk about warming up has left Kavadlo wondering about what should happen after a concert.

“All athletes do a warm down after a competition,” she points out. “That’s standard practice. Some wind players do that. But all the string players I know are out the door and home having a beer before the audience is out of the hall.”