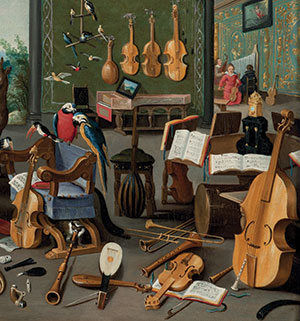 On a crisp fall afternoon, our viola da gamba consort gathers to share in creating the sweet sounds of the viol. I am right in the middle, on the tenor line, surrounded by silver sounds above and below me—the sounds of the viol, with its aching, simple beauty and purity of spirit. We are playing Purcell’s Fantasia No. 5, a piece that begins with a serene melody weaving together melodic lines that are simple in themselves and yet complex in their contrapuntal interaction. Then, out of the sweet harmonies, an agonizing dissonance arises out of the depths. In this fantasia, especially, I can feel the expressive tension, sometimes harsh and searing discords, and the intriguing weaving together of melodic lines. As our group senses the music pulling us into its core, we began to feel that we are no longer four instrumentalists trying to fit into an ensemble, but rather a single organism bound together by the magic of the moment and the joy of sharing this wonderful music. Hearing our truly blended sound and seeing the serene joy on each other’s faces make this a transformative experience.

Music has always been at the center of my life. At age four, I began learning to play the recorder, and played simple Renaissance music in my family consort. That early experience planted the seeds for my love of early music. I began studying piano at age five, and at eight I took up the violin. I spent my youth studying, playing in school and university orchestras and chamber groups, and especially playing chamber music with my family, at that point mostly Baroque music. For the next 40 years, the violin became the center of my musical life, with occasional dabbling in the viola and cello. No matter how wonderful the musical experiences, though, I never lost my wistful yearning for the simple beauty of the Renaissance music of my early childhood. I made a few attempts to play early music on modern instruments, but the complex timbre of the instrument just didn’t fit with the simple purity of the music, and I didn’t pursue it.

After I retired from my career as an airline pilot, I came back to my first love of music, and completed a master’s degree in music theory. I continued to play violin and viola in chamber and orchestral settings, and relished having the time to devote to these instruments. One special musical opportunity was playing in a string quartet with two professional violinists and a very skilled and musically sensitive amateur cellist. We bonded well, both musically and personally, and we cherished the opportunity to explore the wonderful repertoire of the string quartet.

At that point, the universe dealt me a strange but ultimately wonderful twist: I began to lose both strength and dexterity in my hands and arms, which turned out to be early signs of Parkinson’s disease. Playing modern instruments became increasingly difficult, until I was forced to recognize that I was no longer able to do it. Our days of string-quartet playing seemed to be over, and we all grieved for the loss of it.

However, the special musical and personal bond we shared led us to think about how we could continue, and a wonderful idea occurred to us. The viola da gamba requires much less strength and dexterity than modern stringed instruments, and our cellist happened to be an excellent viol player. We decided to transform our string quartet into a consort of four viols. While three of us knew nothing about playing the viol, our cellist was a skilled and patient teacher, and we gradually learned how to express ourselves on these wonderful instruments. The sweet, pure sound of the viol was captivating, and best of all, I could finally return to the early music for which I had yearned so long. We have spent the past five or so years exploring the wonderful world of Renaissance and early-Baroque music, and this has been the greatest musical joy of my life. Funny how the development of a disease, which could have created such a loss, actually turned out to be one of the best things that ever happened to me.

There is much exquisite music that is either written for viols or is well suited to the viol. I eagerly anticipate continuing to explore this rich repertoire, including music of a few of my favorite composers of the period, such as William Byrd, Tomás Luis de Victoria, John Dowland, John Coprario, John Jenkins, William Lawes, Matthew Locke, and Henry Purcell. There is a wealth of wonderful five- and six-part music, and those additional voices make possible the rich, complex, and mysterious harmonies and contrapuntal textures that make Renaissance and early-Baroque music so very special.

Now when I gather with fellow viol players, I relish every moment and the joy that this exquisite instrument has brought to me and continues to bring. In this shared exploration of the music of the viol, I am joyous to finally come full circle, back to the cherished music of my earliest youth.

The viola da gamba is a sweet, gentle instrument that was played primarily in the homes of the aristocracy in the 17th and early-18th centuries. Usually with six gut strings, the viol has frets and is tuned similarly to its cousin, the lute. The viol’s most common sizes are treble, tenor, and bass (and occasionally alto), and all are played upright on the leg (hence the name viola da gamba, or viol of the leg). Its lightweight construction creates a soft sound that requires a delicate touch with the bow, and one of the greatest challenges to the modern string player in transitioning to the viol is mastering the light touch that the instrument requires. It is that very lightness and gentleness, however, that makes the sound of the instrument so sweetly special, and well worth the effort. —JC