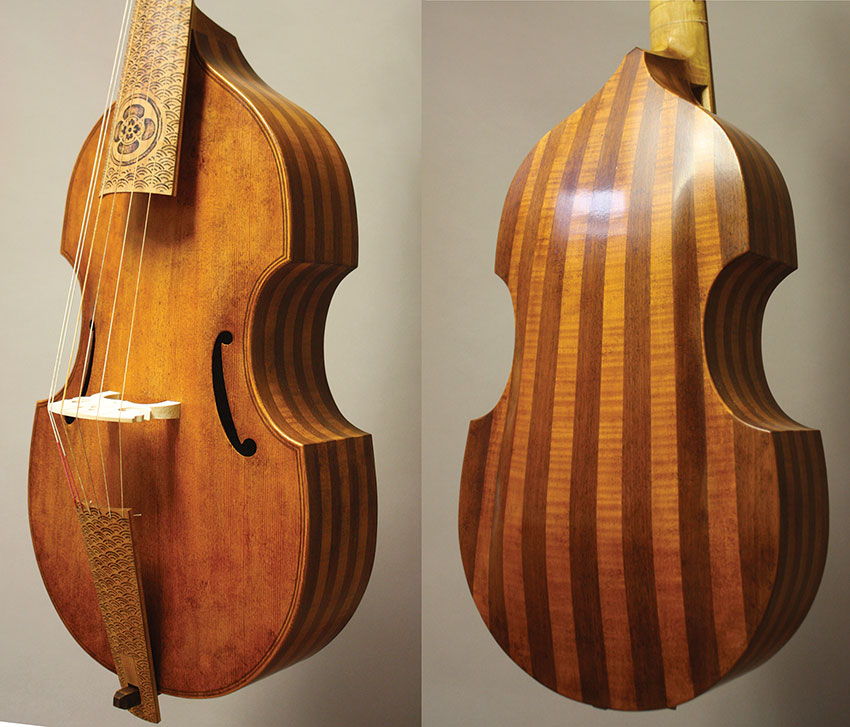 Gesina Liedmeier’s Historical Instruments Reflect the Passions of Her Clients

Gesina Liedmeier has lived a creative life for as long as she can remember. As a child, she found inspiration in music and the visual arts, taking up the recorder and the guitar, as well as crafting and writing. When she decided to make the transition from the guitar to a bowed instrument, her guitar teacher suggested the viola de gamba. Liedmeier then took her passion for the instrument and art history all the way into higher education, where she studied viol at conservatory and prepared to become a professional player.

Possessed by her quest to live and breathe the viol, Liedmeier felt that knowledge of her instrument shouldn’t end at the playing of it, but begin there. Her next step would be to make viols from scratch, to know every intricacy of the instrument, inside and out, from start to finish. After studying under Wieland Kuijken at conservatory, she moved on to a professional fretted-instrument-making program in England, and from there, a viol-making apprenticeship in France.

But everything changed for Liedmeier when she began restoring the historic collection at Gemeentemuseum in the Hague. “Direct contact with original instruments taught me so much more than any master could have,” she says. “The biggest lesson [I learned] is that we tend to think in schools, very defined styles, but in reality, most instruments don’t fit exactly in those boxes. Like humans really.” She makes a good point.

Liedmeier’s passion for her work is palpable, with a quick scroll through the gallery on her website. She’s taken the traditions and principles from her training and added a unique artistic quality, each piece made specifically to order. Each instrument is the result of hours of personal meetings and conversations with her clients in order to capture the essence of what they’re looking for in their playable work of art.

And art is an integral part of her vision. The heads of humans, animals, and spirits are carved into the scroll of each viol, and intricate lattice-like designs grace the backs and bodies of many of her instruments. Attention to aesthetic detail extends to the necks and tailpieces, whether carved, stained, or painted.

Liedmeier is happy to leverage her skills as a painter to accomplish her goals, although she describes the painted elements of her pieces as extra and unimportant to the overall finished product. “The paintings are just for fun, if the client asks for something specific. What’s important is playability, sound, and radiation of the instrument,” Liedmeier explains. “I want the player to feel able to tell his or her story through the instrument. That’s the only thing that counts.”

“We tend to think in schools, very defined styles, but in reality, most instruments don’t fit exactly in those boxes. Like humans really.”

Developing the right sound is key, as the instrument is shaped into a tool that melds the historical elements of the viol with the needs of the player. “It needs to react to the player and have lots of possibilities in sound. [The sound] should attack and move you.”

Because sound is everything, in addition to offering her instruments for sale, she also sells strings on her website. She has them made in Italy to her exacting standards. Her strings are designed to deliver a warmer sound with easy playability, due to their lower density. She recommends going up a size from what you’re used to if you plan to order a set.

After 25 years in the business of instrument making and restoration, Liedmeier is still constantly seeking to improve upon her techniques and practices. “I’m slowly getting more of a grip on the whole making of the viol, experimenting with each new piece and doing loads of research,” she says. “I’m often inspired by the things I see in old instruments, but I tend to make very personal viols.”

Liedmeier finds her inspiration not only from composers like J.S. Bach and Binchois (also known as Gilles de Binche), but also from visual artists like Jan van Eyck and Tilman Riemenschneider. What’s been intriguing her most lately has been using her craft as a vehicle for personal expression, exploring the intersection between creativity and pain and how people try to understand this in each other.

These days she focuses almost entirely on commissioned pieces, as she doesn’t have time to create anything else. When she’s not working on a viol, she’s occasionally playing one. Liedmeier confided that, due to her incredibly packed production schedule, she has to be very selective about whom she plays with and when.

“I want to be surrounded by friendship and have a nice time together.”