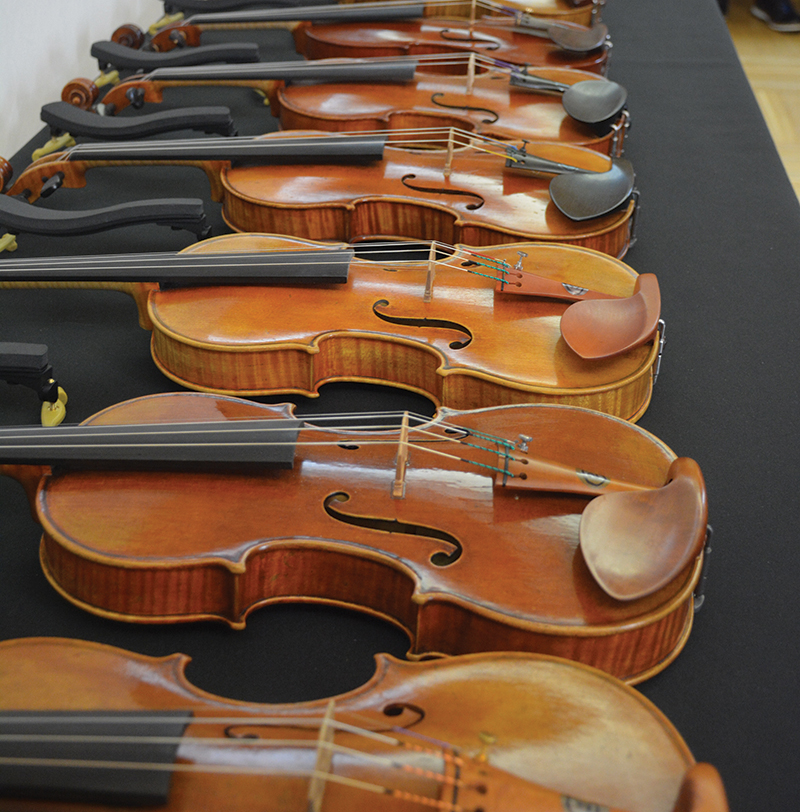 What defines “good tone”? How do you know if you’ve found it in a stringed instrument? As cellist Jia Kim describes it, players can usually intuit whether or not they immediately gel with an instrument, or whether it’s of good quality. “You can sense that the cello is responsive, the cello is vibrating. When I play close to the bridge, can it take a little pressure? Will it project?” she begins. “Does it respond right away? Those are things I look for immediately.” When it comes to deeper nuances, however, the search for “good tone” can quickly become complicated. This is especially the case if you’re shopping for a new instrument and are test driving multiple options.

If you are in the process of pinpointing what “good tone” is and if an instrument at hand has it, you are not alone. This year, the Violin Society of America holds its biennial competition. What better people to ask about simplifying the process than those who’ve judged tone officially? I spoke to Kim and violinist Annie
Fullard—who were tone judges at the VSA competition in 2016—about their tone-evaluating process, and what a player should look for in a new instrument.

Determine Your Ideal Sound Before Diving In

Unlike measurable attributes like projection, tone is subjective. “I think that it goes without saying that everybody has a particular sound that speaks to them,” Kim says. “We all have different palates and preferences when it comes to food or taste.” She explains that, as a chamber musician, she naturally had different tone expectations than her fellow judges, Cleveland Orchestra cellists Thomas Mansbacher and Ralph Curry. She knew she idealized warmth and supportive tones, plus cellos that had a nice bass but also a pleasant tenor on the A string. A cello’s ability to have multiple personalities was also important. (She says that her orchestra colleagues prioritized more well-rounded cellos.) She also knew what she wasn’t looking for, and advises instrument shoppers to determine the same. “You wouldn’t want a cello that has an A string that sounds like steel or like somebody screaming,” she offers, laughing. Kim adds that you want to find a sound that, upon the first bow stroke, gives a sense that this instrument has something you can work with.

“When I test the violins, I try to reproduce the resonance, depth, and projection of singers, which helps me focus on what I specifically expect from the sound.”

Fullard, a violinist from the Cavani String Quartet, uses a unique strategy. “As a violinist, I relate to sound and tone production always as a vocal experience, and through character and even colors—as those relate to pressure and speed—as if the bow is a paint brush,” she says. “I also find it helpful to assign the qualities of certain singers to each string. For example, Ella Fitzgerald for the G and D strings, Cecilia Bartoli for the A string, and Dawn Upshaw and Julie Andrews for the E string, to name a few. When I test the violins, I try to reproduce the resonance, depth, and projection of these singers, which helps me focus on what I specifically expect from the sound.”

Bowing open strings is a helpful way to first tap into an instrument’s tone potential. However, both judges say there’s nothing like the right repertoire to awaken what an instrument can do. “My strategy as a tone judge in the first round is to play the exact same four or five short excerpts from the chamber-music literature,” Fullard says. She plays the first movement of Mendelssohn’s Octet in E-flat major, Op. 20, which Fullard insists “catches the range, touch, and ease of the playing”; the opening of Debussy’s String Quartet in G minor, L 85, Op. 10, “to hear resonance and power” on the G string; the opening of Ravel’s String Quartet in F major, “to test variation of color and timbre in response to bow speed and pressure”; excerpts of Mozart’s String Quartet No. 21 in D major, K. 575, “for E-string sparkle and shine”; and the last movement of Beethoven’s String Quartet No. 8, Op. 59, No. 2, to test “for facility and power.” This isn’t to say that one should perform these exact works. Rather, it can be helpful to find pieces that you think elucidate specific idealized qualities.

Kim also has her own repertoire toolkit that she uses as tone-exploration gateways. “I personally would try all these different things on the low, middle, and high registers to see if that particular cello responds,” she says. “For me it was really just about exploring those different personalities of the cello.” To investigate a cello’s C string, she opts for something like Shostakovich’s Cello Concerto No. 1 in E-flat major, Op. 107, which has “a heavy bass,” and is “very articulated and loud.” The cello must respond right away, she explains. To perceive a cello’s middle range, she performs something from Dvorak’s Cello Concerto in B minor, Op. 104, Saint-Saëns’s Cello Concerto No. 1 in A minor, Op. 33, Beethoven’s Cello Sonata No. 3 in A major, Op. 69, or Prokofiev’s Cello Sonata in C major, Op. 119. She also selects more lyrical pieces to examine the A string, looking for a beautiful, bell-clear, mezzo-soprano tone. Kim advises that if you’re stumped, Bach is a good choice. “You can see how pure the sound can actually get,” she says.

At the core of tone judgment, obviously, is careful listening. As is typical, both judges took notes during the process. They also strived to be in a mindful, concentrated headspace.

Having as many controls as possible, such as the same bow for each instrument, is essential. “Try the same things, try to do it with the same dynamics and same fingerings and same kind of thing on all of the instruments,” Kim says. “I switch cellos and play the same passage—the same ten seconds—let’s say three times. I try again and try again.”

For the VSA competition, the judges tested dozens of instruments, which can quickly feel overwhelming. Kim tried to “not compare a cello that I was playing on at that moment to the previous one only. I tried my best to sort of start from a clean slate as much as possible. I tried to remember how that particular cello felt at that moment in those first few seconds.”

Fullard, who recommends recruiting colleagues for blind tests in a hall, adds that it’s vital to consider how an instrument’s tone projects. “It’s quite valuable to try an instrument in a very large space, and also in a smaller, less-resonant space while listening for a resonant or ringing quality,” she says.

Fullard also offered tips for when it’s time to narrow down your choices. “I can usually tell after the first round of excerpts if the violin can express a range of dynamics and colors. From that point I can go back to those instruments and play the same excerpts back to back, and a concerto excerpt,” she says. “I listen for a personality in the sound, and certainly a brightness or sheen, which I can darken with my choices of bow speed, pressure, contact point, and vibrato. I try to listen for the sound coming back to me from a far corner of the room for projection.”

Especially with notes and secondary listeners at your side, the process of finding that instrument with “good tone” can be more straightforward than originally thought. However, the judges insist it’s not just a matter of ticking all the boxes on your list. Kim compares it to a deeper, more instinctual method. “We could have blueberries shipped from New Jersey all our lives living in New York, but once we taste those fresh blueberries picked right away from the ground of Maine, there’s a taste that you’ve never experienced—a sensation never felt before, which triggers our brain and emotions to say, ‘Wow, that’s something I never tasted before.’ I think it’s the same for instruments,” she says. “You want to look for that ‘wow’ factor that makes you change the way you listen. You want to look for a new sound that you only imagined but is now a reality.”