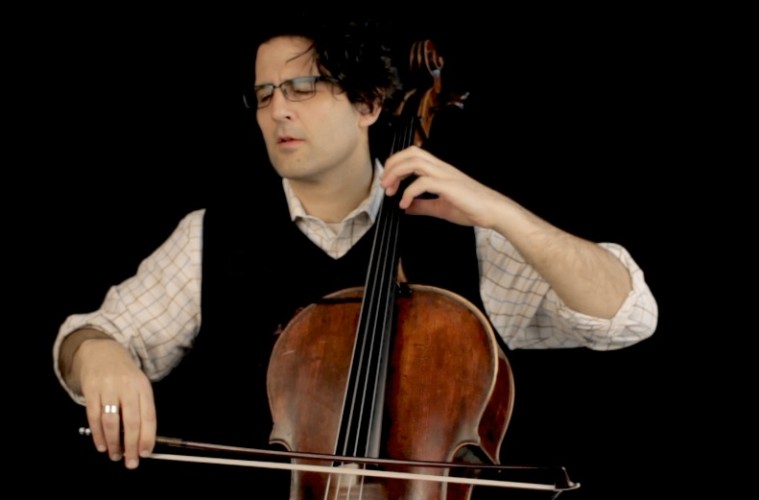 For the Record: Cellist Amit Peled’s ‘To Brahms with Love’

When Amit Peled received the historic 1733 “Pablo Casals” Goffriller cello six years ago, he knew there were certain cello repertoire highlights he’d love to record with it. Peled’s latest CD, To Brahms with Love (CAP Records), tackles Brahms’ sonatas for cello and piano: No. 1 in E minor, Op. 38, and No. 2 in F major, Op. 99.

It’s repertoire that he and pianist Noreen Polera have performed countless times. While they’ve recorded many albums already—this being number 13 for Peled—this project plunged them into an unconventional recording process. They invented a method that may seem bold: minimize the engineer.

“We actually had to tell the engineer, ‘This is how were going to do it.’ We basically came to an agreement that he pressed the button for the whole session,” Peled says. The idea behind this: capture a live-concert atmosphere that remained faithful to their “souls as artists.” Amid what Peled largely describes as a market saturated with overly squeaky-clean recordings, this spontaneous, daring method helped him bring forth his personality. It was the best way, he says, to honor the legend of the cello, Brahms, and, especially, Casals.

A lot of personal, historical, and musical connections converge with this project. When did you think to record the Brahms sonatas?

I knew that Pablo Casals himself as a child played for Brahms. I studied with Bernard Greenhouse, who was a student of Casals, so there’s a direct connection. And of course, I love, love his recordings of [the Brahms sonatas]. [I] thought this would be a sort of homage to the cello rather than Casals, to take this piece of wood and congratulate it for being alive for so long and for experiencing so many hands and approaches to this music.

What was the recording process?

Last June, we spent the whole week in Miami; we spent three days recording it and the following day we performed it, which is how you would normally not do it. You would normally perform and then record. But since we played them so many times we wanted to have quiet time during the week with the producer. We stayed in a beautiful hotel next to the church where we recorded, which had beautiful acoustics. It was really a nice process of diving into each phrase and recording it as many times as we wanted to.

We were synchronized. We felt really comfortable in the space, with the instruments. Even with the weather, because it was extremely humid and we were sweating like crazy. All of those things you have to take into account. It’s an environment you have to feel completely comfortable in because you’re trying to produce the secret diamond inside you, to share it with a microphone, hopefully with the world. It’s not an easy process.

Why did you adopt the unconventional recording approach?

We wanted to feel that this is a concert. This is something flowing, something that is alive. A lot of recordings, I have a problem with—where it becomes just a puzzle and the engineer stops you every second, every note. Then, you don’t even know what the tempo is anymore. You just play and all of a sudden you get a master and it sounds better than you could ever play, but it’s boring. We decided not to do that. We recorded each movement twice and we told the engineer, [for example], “We felt the second one was better.” And then without even going into details, we started from the beginning until, let’s say letter A, and then we played that twice. And then from A to letter B; we did it twice. And B to C, and so on. So, we felt we covered enough material, but nothing was just a note or just a bar or even just a phrase. It was just the feeling and flow of a concert.

I must say, this CD, with the history of the personal story and the way of recording, is by far the only CD of myself that I can listen to. I feel good about it. I think I will adopt this way of recording.

What are other ways you captured a live-concert experience?

I looked at the microphones and I imagined they were actually humans. They’re all around me and they’re listening to me. I tried to perform a big chunk of the piece and not just a phrase. Even at times when we felt that it was a good run-through and we probably didn’t need to do it again, we stuck to this format of doing a [complete run-through] twice and then in big chunks twice.

It seems like you set yourself up to be in the right headspace.

You’re totally right. I also think it’s a matter of experience. You make your first CD and you want it to be clean. And then you always want to be clean, and be clean, and be clean. You forget: There are enough recordings that are clean. Not to say that it shouldn’t be clean, but if it loses what I call direction—if a phrase loses the punchline, the gravitation point, or the black hole where it pushes you somewhere—it’s a beautiful sound, but it’s the same dynamic and it doesn’t go anywhere. I feel that if that [direction] doesn’t happen, it’s not worth listening to it.

You’ve performed these sonatas so many times. Did any new insights arise about this music during this recording experience?

Totally. Many. When you make a recording, it is a statement. Of course I play those sonatas by memory [in concert]. Recording, and having the urtext edition in front of me and always looking at it, all of a sudden you find, “Wow, this is an eighth note and not a 16th note, and I’ve played it so many times like a 16th note.” You want to make sure that doesn’t happen because [a recording] is a statement for life. This is something that will stay forever.

And then, having the producer, who in this case is a pianist, was wonderful. Because she is not a cellist, she raised questions that normally cellists don’t, and that was a great learning experience, having those pairs of ears over there.

Was a live, organic feeling also important because you are gesturing back to Casals?

Yes. Casal’s recording—this was the ’30s—came at a time when you didn’t cut. You just did run-throughs, and if one was good, that was it. I think it’s much more spontaneous. You know, you’re jumping into the water and you have to swim to the other side. That’s it. And you tell the engineer, “I’ll see you on the other side.” You have to get there. You cannot stop and fix. And that’s exactly what you do in a concert.

That kind of feeling, of “I’ll see you at the end!” is something that we lost completely in recordings because we tried to become perfect. Technology took over us. The albums became the CDs of the engineers, not of the artists. One of the things Marta Casals Istomin told me when she gave me the cello was, “There are two things I want you to do. One is to share the legacy of Pablo Casals and the voice of the cello with the world. But, the other thing is, I want you to find your own voice through it.” I think that finding my voice, a lot of it is to dare to go back to how it used to be.