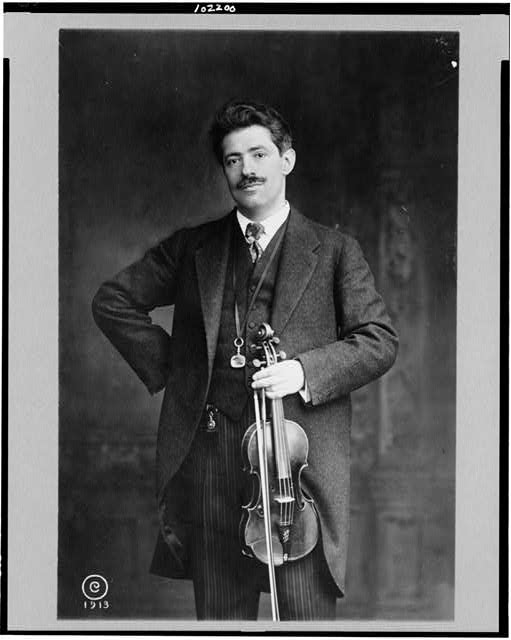 Essential Historical Recordings: When Fritz Kreisler Changed How We Hear and Play Violin

Fritz Kreisler, who forever changed the way we listen to and play the violin, was a disarmingly charming revolutionary. His music-making was animated by a riveting vibrato the likes of which no one had previously possessed or even imagined, and he used it constantly, even in passagework—something else no one had imagined. This, along with his fantastically schmaltzy slides, natural and subtle timing, and profoundly free-spirited approach to music and life gave his playing an unprecedented sensuality and warmth. Surprised audiences were slow to respond. But once they got used to what they were hearing, they decided Kreisler’s playing was just what they’d been waiting for, and made him their favorite. Soon, other violinists were practically required to emulate the great Viennese—and did so with pleasure. Without Kreisler, violin-playing simply wouldn’t sound the way it does today.

Check out more from our Essential Historical Recordings series

Everything about his violinistic beginnings was extraordinary. Born in Vienna in 1875, he took up the instrument at four, and by twelve had won first prizes at the conservatories of both his hometown and Paris. At thirteen he toured America, playing the Mendelssohn Concerto with the Boston Symphony. But returning home, he spent four years in academic and pre-medical studies, not even touching the violin, and then served in the army. Following military service, he did rededicate himself to the violin, and in 1899 made a Berlin Philharmonic debut at which his older colleague Ysaÿe famously gave him a standing ovation. But Kreisler was leading a Bohemian existence, spending most of his time in gambling dens, pawnshops, and the arms of a succession of lovers. Carl Flesch, who knew him and his playing well, described one performance during this period: “Kreisler’s cantilena was an unrestrained orgy of sinfully seductive sounds, depravedly fascinating, whose sole driving force appeared to be a sensuality intensified to the point of frenzy.”

Life changed in 1902, when Kreisler married the American Harriet Lies, his temperamental opposite. She became his manager and minder, and he credited her with his success. He began to record, and to publish the many arrangements and compositions violinists still love to play. (Infamously, many of these compositions were initially presented as the work of long-dead composers, and revealed as originals only decades later, to the chagrin of gullible music critics.) The frenzied sensuality mellowed into something more akin to a warm, reassuring hug.

One thing that didn’t change was Kreisler’s attitude to practicing: he was against it. He believed “[…] everything is in the brain. You think of a passage and you know exactly how you want it …” Too much practice, he said, “benumbs the brain, renders the imagination less acute, and deadens the alertness.” He preferred warming up not before a recital, but during its first fifteen or twenty minutes. And he was talented enough to get away it—though according to Zino Francescatti, “there were times that his neglect of technical work showed in his playing.”

Technique was not, however, the foundation of Kreisler’s appeal. That lay in the vibrato, the irresistible timing, and the portamenti. Experts have disagreed as to Kreisler’s means of producing these portamenti, the precise combination of old- and new-finger sliding and bow accentuation. What certainly distinguished them was the vitality of vibrato on the arrival note, in contrast with the painfully old-fashioned approach of some contemporaries. Also very much Kreisler’s own was his bowing style. Disdaining the long, sustained bow-strokes most violinists slave to master, he played with a very tight bow, using accented strokes at the middle, with frequent bow changes. (Isaac Stern estimated that he used only 70% of his bow.) Flesch was of the opinion that Kreisler’s unique new approach was “but the inevitable result of his highly individual need for an increased intensity of expression.”

Kreisler’s career was uniquely unthreatened by the rise of Heifetz; he held a special place in audiences’ hearts. In 1941, he was hit by a truck crossing a New York street, and spent weeks in a coma. Though he recovered, and made some additional recordings, his playing wasn’t quite the same afterward. But aside from his last recordings, his discography generally shows him at his highest level. He recorded only a small number of the major works in his repertoire. Standouts include a Beethoven Concerto with Leo Blech and the Berlin State Opera Orchestra (with his own cadenzas, naturally); the first Beethoven Sonata, with Franz Rupp, the theme and variations movement of which demonstrates Kreisler’s sophisticated rhythmic sense; and a delicious Grieg Sonata with Sergei Rachmaninoff at the piano.

He recorded a huge number of short pieces. A Bach “Air” from 1904 features that sensuous vibrato that first shocked and then seduced audiences. Recordings of his own compositions everyone ought to hear include “Liebesleid,” “Liebesfreud,” Tambourin Chinois,” “Caprice Viennois,” the stylish “Polichinelle,” the courtly faux-Couperin piece “La Précieuse,” the temperamental “Gypsy Caprice,” the intimate “Londonderry Air,” and “Marche Miniature Viennoise,” with Fritz’s brother Hugo joining in on cello. Two Dvořák Slavonic Dances are replete with sorrow, nostalgia, and verve, while Humoresque scores high on both sentiment and intensity. Massenet’s Meditation from Thaïs is played with a flowing lyricism that never lets up, while Cyril Scott’s “Lotus Land” serves as a languorous pretext for gorgeous rubato and portamento. Iberian-inflected gems include two Albéniz pieces, a juicy Malagueña and a sultry Tango, and a suave, sparkling Falla Spanish Dance. Poldini’s “Poupée Valsante” is buoyant, “Hymn to the Sun” from Rimsky’s Golden Cockerel luxuriant in tone, while Chopin’s A minor Mazurka serves as an object lesson in masterful rubato.

Please note some of the above are affiliate links, meaning Strings will earn a small commission (at no cost to you) when you click through and make a purchase. Thanks for your support!

This article was last updated in December 2022.