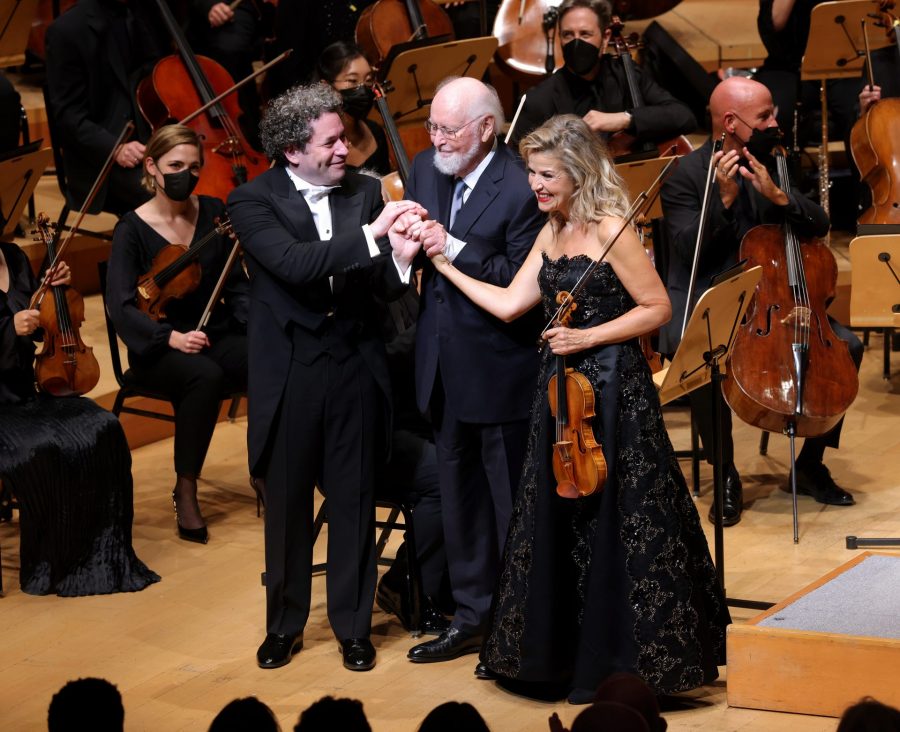 Nick GrizzleSeptember 30, 2022
String playing is the greatest. And Stringsmagazine.com is here to support you and the string world with fantastic content (like this story!) If you like what we do, please make a donation to support our work and keep the site running.

Fresh from a preconcert cocktail hour, the glittering audience (in many cases literally glittering—sequins, especially in dark hues, seem to be a thing) begins sauntering in at 7 PM, both fashion conscious and fashionably late. This is the Los Angeles Philharmonic’s opening gala, which renders sharp start times into mere approximations in the pursuit of unhurried bonhomie. And that sense of easy good humor abounds as people take their seats, the hum of cheerful conversation and rustling fabric composing the white noise of anticipation. Tonight, in a concert celebrating composer John Williams on the occasion of his turning 90 earlier this year, violinist Anne-Sophie Mutter will be playing the violin concerto (Williams’ second) that he wrote for her, as Williams himself conducts. The orchestra will then be playing pieces from several of his film scores under the baton of LA Phil music director Gustavo Dudamel—and there’s no doubt that everyone in the hall is happy about every bit of it.

John Williams’ bio is so extensive I couldn’t possibly slice it down from the banquet it is into the bite that space requires and be in any way comprehensive. Have you ever been to the movies? If so, you’re undoubtedly familiar with his work. Star Wars, Schindler’s List, Jaws (terror in two notes), Close Encounters of the Third Kind, Indiana Jones, Home Alone, E.T.: The Extra-Terrestrial, the first three Harry Potter movies, Jurassic Park… This list goes on. And on. And on. He’s won five Academy Awards, seven BAFTAs, 25 Grammys, and four Golden Globes. He was one of the last two honorary knights to be approved by Queen Elizabeth II before her death. Film and TV scoring aside, he’s composed two symphonies, two violin concertos, a viola concerto, and cello concerto premiered by Yo-Yo Ma. He was music director of the Boston Pops for 14 seasons. It’s a bio 90 busy years in the making, and the man’s still working.

But what’s not in his bio is how much people love his music, how it seems to capture hearts and imaginations in a palpable way—and that’s what the buzz is about this evening.

Once the orchestra is all seated, concertmaster Martin Chalifour has taken the stage, and Dudamel is happily installed at his place on the podium, the ensemble launches into Williams’ Just Down West Street. It’s a work of energy: a brassy open leads to frantic strings, charming interludes give way to moments of foreboding and anxiety, and the propulsive conclusion seems to exhilarate the orchestra, whose faces show varying degrees of satisfaction and delight. It was a fun five minutes.

It’s now time for Dudamel to introduce John Williams, and, as I said before, this is no small task. So he keeps it simple, which is, of course, wise. We all know who he is. Dudamel isn’t scant in his praise, however. He calls Williams one of the greatest composers of all time, placing his work in the category of Mozart’s and Bach’s. “This music,” he says, “is for eternity.” And then John Williams and soloist Anne-Sophie Mutter take the stage.

Williams has to signal to the audience for quiet before they’re ready to give it. Mutter, a star in her own right, seems happy to nudge Williams into the spotlight and join in the audience’s appreciation. Quiet achieved, Williams and the orchestra launch into his Violin Concerto No. 2 with lush strings in an unsettled, angular first movement that sends the intrepid violinist into passages that gallop at breakneck speeds throughout the instrument’s range. Mutter is utterly secure in every technique, from the thorniest to the most lyrical, demonstrating what Williams calls, in his program notes, her “flair for an infectious rhythmic swagger that is particularly her own.”

If you listen to the second movement knowing it’s titled Rounds, you can hear the circular motion in it, but even if you don’t, there’s much to enjoy here, especially in Mutter’s pure, crystalline tone and vocal approach to the music that heightens its drama and beauty. The third is a bit of a romp—energetic, spiky, and raucous, with Mutter digging into double-stops and tossing off a playful cadenza.

Williams’ conducting style isn’t emotive; he directs the orchestra firmly but quietly, his motions spare and efficient. He turns to Mutter as she plays the piece’s cadenzas, offering her the weight of his full attention as she deftly negotiates the music’s demands from subtle murmurs to virtuosic pyrotechnics. The orchestra throughout is committed, disciplined, and balanced.

The Epilogue is melancholy, Mutter spinning a rich tapestry of sound, her inconstant use of vibrato serving the music well. She shows her mettle in the piece’s final, exposed note in the stratosphere, stretching on for ages.

An ovation and general love-fest follows.

Once the applause subsides, Dudamel leads the orchestra through three pieces from Williams’ film oeuvre. The first: “Scherzo for Motorcycle and Orchestra” from Indiana Jones and the Last Crusade. It is brisk (very brisk) and rollicking, adventure and humor and ever-present near-disaster all jammed into a tune as the orchestra goes careening through the piece with a great deal more precision than Indiana Jones ever managed in his exploits. The second is “Princess Leia’s Theme” from Star Wars: A New Hope, her own hope and struggle gently communicated through a beautiful horn solo, then passionately followed by a string section that plays it for all it’s worth.

The final (spoiler alert—scheduled) piece is “Adventures on Earth” from E.T. In this film, the music—capturing something of the wonder and tumult of childhood—and image blended to make sci-fi feel a lot like magic. The brass shows admirable restraint in the midst of an orchestra that really goes for broke, encouraged by an enthusiastic but ever graceful Dudamel. The balance is just right, and the crowd loves it.

After much applause in the composer’s direction, Mutter reclaims the stage and plays the theme from Schindler’s List as an encore, in all its aching, lyrical glory. After another hailstorm of applause, perhaps hesitant to end the evening on a melancholy note, Dudamel turns to his players and asks for one more. The theme from Star Wars. As the first notes ring out, the crowd gleefully hoots its approval, and leaps to its collective feet at the music’s triumphant close. Williams is brought back to the stage by Mutter, and the members of the audience heartily salute, again and again, the composer who provided the soundtrack to so many of their most cherished fantasies.