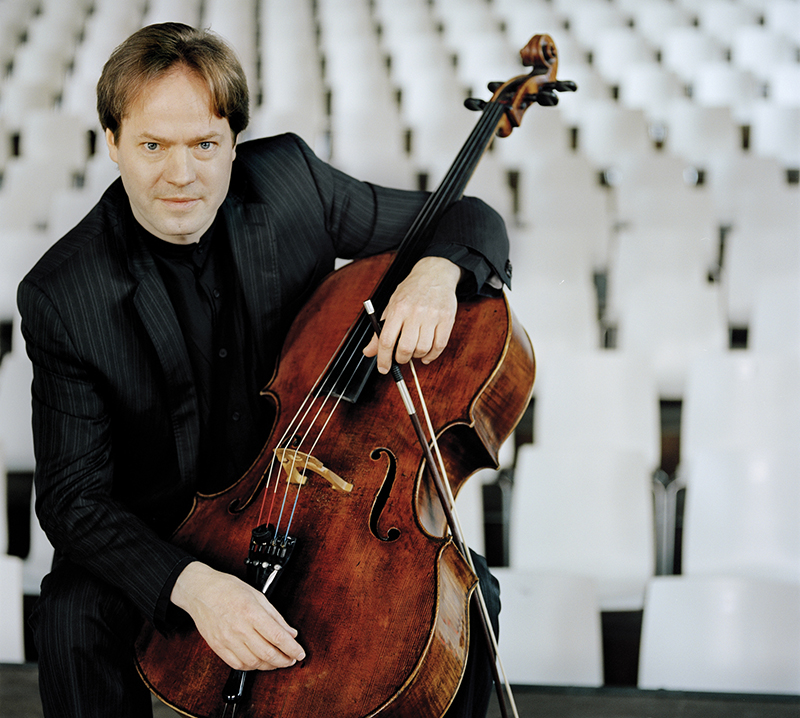 Cellist Jan Vogler on the Lessons He’s Learned From His 1707 ‘Ex-Castelbarco, Fau’ Stradivari

Olivia WiseDecember 25, 2018
String playing is the greatest. And Stringsmagazine.com is here to support you and the string world with fantastic content (like this story!) If you like what we do, please make a donation to support our work and keep the site running.

Who wouldn’t leap immediately at an opportunity to play a cello by Antonio Stradivari? For Jan Vogler—who was at the time content with his 1721 Montagnana—the path was clear.

“When I saw this instrument, it became apparent to me that this was a once-in-a-lifetime chance,” Vogler says via phone from New York. “Because, how many forma-B cellos by Stradivari would ever be on the market? I realized right away this was a great chance.” The most ardent encouragement, however, came from a special source: his father. “He used very strong words to show me how important that cello is and that I cannot lose [it],” Vogler says. His father, who was also Vogler’s teacher and steadfast mentor, was ill at the time. About a month after Vogler secured the Stradivari, his father passed away.

Now, playing the cello is not only a bridge to the music, but to their treasured bond. “That connects me with him all the time . . . I have to thank him partly, that he reminded me that such a cello can inspire a career of a cellist very, very much and can inspire the everyday work on the music.”

Vogler spoke about the “ex-Castelbarco, Fau” cello’s vast array of colors, meeting its siblings, his customized case, and the many love affairs Vogler suspects his cello has sparked over the centuries.

Tell me about your cello.

I am very fortunate to play a cello by Antonio Stradivari, which he made in his so-called Golden Period. He really invented the modern cello around 1707. He built my cello as one of the first examples of the celebrated so-called “forma B” . . . I think he just wanted to establish that he found a different shape and a different size for the cello.

The interesting part is he built 20 cellos on that pattern and he only changed it very slightly, so the size of these cellos was pretty much identical. Only here and there are they a little bit different in arching or in the ribs or in the material he used. So, he experimented, but ever-so-slightly.

Have you come into contact with any of the other forma-B cellos?

Over the years—I hope I’m not exaggerating by saying this—I’ve played or met probably most of them by now. More than half, at least. They’re all wonderful cellos with similar features. They all have an enormous bass, which is surprising because the cello is rather slender. It’s not a large cello. Very tenor-like A string. Very strong singing string on the top. I think he knew what he was going for and he got it.

What do you know about its history and others who have played it?

In the 19th century, I know it was together with another Stradivari cello in Italy with Count Castelbarco, who was a collector of, I believe, two complete quartets of Stradivari instruments. After his death, it was auctioned in London with most of the instruments of the collection. The most famous violin dealer of that time, Jean-Baptiste Vuillaume, came from Paris and bought these two cellos and resold them. The very unusual thing about my cello is that it comes with a whole pack of letters between Vuillaume and the buyer of the instrument, a Frenchman, Eugène Fau. It was a letter exchange, but I only have the side from Vuillaume—about ten letters by this great luthier talking about this cello and its merits and beauties of sound. Already back then, he was telling the buyer, Fau, how great this chance is and that he will never have a chance to buy such a cello, which is a very curious remark in 1865, if we think about it. It shows me that already back then it was a very rare thing to have.

“You realize that a Stradivari cello is
a very, very professional tool, which needs a lot of masterful moves. Ever since I [acquired] this cello, I’ve learned so much more about cello ”

The sister cello, she has a name, “Castelbarco.” Both cellos are called Castelbarco; mine is called “ex-Castelbarco, Fau” because of this buyer I just described, who bought it from Vuillaume. The other Castelbarco cello is in the Library of Congress in Washington, DC. When I played a concert there, I was able to have the cellos meet again. For many years they hadn’t seen each other, so I took the chance to take the other Castelbarco cello out of the glass case and play them both next to each other.

What gift does your cello bring to your playing?

Of course the Stradivari cellos give you so much sound. In a great instrument, always, you get an offering of sound and colors that is overwhelming when you are unprepared for it, especially when you don’t play it every day. So when you see a cello like this—and I see it with colleagues [when they play my cello] or when I play a cello of someone else—it just right away hits you: There are so many colors and so much sound. At the same time, that is just the first impression.

The second impression is, “OK, the cello has so much sound and so many colors, but where are they and how do I use them?” [Laughs.] In the second step, you realize that a Stradivari cello is a very, very professional tool, which needs a lot of masterful moves. I feel that ever since I [acquired] this cello, I’ve learned so much more about cello playing. I would say that it took me at least two years to feel familiar with it. After about four years, I started to feel really good about knowing its registers well and how to use them and when to use them.

A cello like this is also a very strong partner who clearly shows you your own limits. You can’t be afraid. A Strad cello is not an easy partner because it’s so good and so genius—it wants quality from you. It shows you your weaknesses. I find that a pleasant thing because when I work, I want to work. When I sit at home and practice, I never have to search for things I’m doing wrong. I get them presented right away. The cello answers you right away and says, “Hmm. Can you try something different? I don’t really like that.”

They are incredibly precise, these instruments, and incredibly demanding. And yet, they have this offering of colors and sound that is remarkable. So, when you play them in a big hall, the sheer power and length of ringing and tone are also really impressive.

If given the ability, what would your cello say to you if the two of you sat down for tea?

I think it would tell me a lot of very private stories. [Laughs.] What I just told you is kind of common knowledge and something people can figure out from the history, but I would make sure it would tell me all the schmooze and rumors and things people don’t know about relationships. I think instruments create relationships. They are very, very strong communicators, especially such instruments, because they are treasured by the owners, the players, collectors, and the audiences. They connect people. I wouldn’t be surprised if there would be some secret love affairs and romantic relationships that a cello like this might have created in the past—and which I’m sure it would tell me about.

Strings Jargar Superior. “My criticism of the Jargar A string was always, ‘It’s beautiful, it’s always ringing, but it can tend to sound a little bit on the bright side.’ The Jargar Superior [strings] are a little heavier, a little darker, a little fatter. I just love them on my cello. I’ve been playing them for about two years and I don’t think my cello has ever sounded better.”

Bow “A beautiful Peccatte bow that is quite heavy and strong,” Vogler says. “That bow, together with my cello, is very, very magical.”

Case A customized double-carbon-fiber case from Gewa. “I know of the responsibility I have when I travel with such a cello, so I asked them for a double carbon. I felt that most of these very light cases are, yes, comfortable to carry, but they are a little thin. In case of impact or crash, the protection is very limited. So, I asked them to build me a stronger case with a harder shell. Inside, for climate control, they lined it with suede. Also, they made extra pockets.

“I have a lot of things I always carry in my cello case, from a bridge changer to rosin, strings, and a kind of a fruit sugar made from grapes, which I like to take before performances. It has a very good effect on your concentration. I think every cellist or violinist should have a nail clipper in their case. There’s enough space in all these pockets.”

Rosin “I like the dark Kaplan. It’s kind of a dustier rosin with a raw and big sound. And then, I use the rosin that my teacher Heinrich Schiff mentioned to me once. It has a nice German name, Künstlerlob. And it’s a light yellow rosin. It’s very sticky, so opposite of the Kaplan.

“I have this ritual before the concert: I put a little bit of the Kaplan rosin and on top I put this Künstlerlob and I feel it’s a great mix. Ever since I studied with Heinrich Schiff, I’m using this combination.”

This article originally appeared in the October 2018 issue of Strings magazine.

Developing Structure and Flexibility in Your Bow Hold