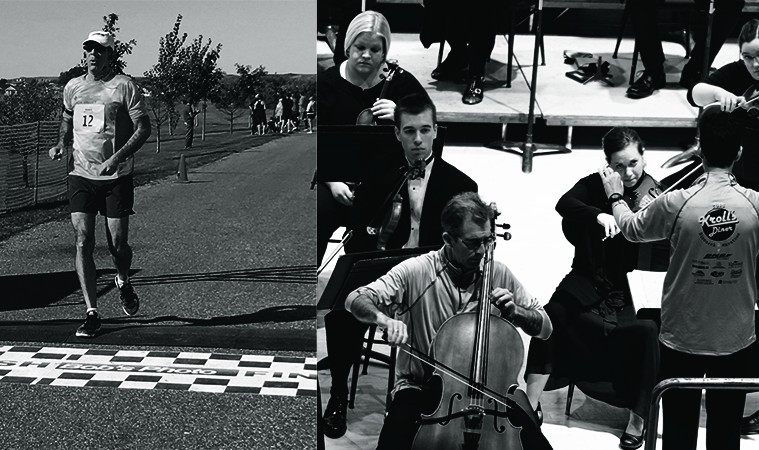 I have always considered myself a very lucky man to be able to make a living doing something I am passionate about. The other day was no exception. Feeling the warm applause from an appreciative audience after finishing my first-ever performance of the Dvořák Cello Concerto with the Bismarck Symphony brought me to the end of a very memorable day in my life.

Now, the hard part—standing up!

Let me explain. I’ve been a professional cellist for the past 30 years or so. I’ve played in orchestras and taught cello for the past 15 years at the University of Iowa. But that’s not all. I have also been a passionate runner and triathlete for many years, and love what exercise does for me physically and mentally.

I first discovered my love of the cello when I was 12 years old growing up in Hawaii. I quickly fell in love with music, but living in the land of surf and sun wasn’t exactly conducive to practicing cello, and it was about that same time that I discovered my other passion—long-distance running. I followed my parents’ lead when the running boom hit the US in the 1970s and eventually ran cross-country in high school as well as four Honolulu Marathons before going off to college.

Over the years, I had toyed with the idea of somehow combining my two passions. But the opportunity had never arisen, and it didn’t seem like it ever would—until I learned that, on the same day I was scheduled to play the Dvořák Cello Concerto with the Bismarck Symphony on September 17, 2016, the Bismarck Marathon was taking place. I realized this was a “perfect storm,” a chance to do something completely unique and maybe slightly crazy: run a marathon and play the Dvořák Concerto on the same day! Hundreds of cellists have performed the Dvořák Concerto. But I was willing to bet no one, not even Yo-Yo Ma, had played the Dvořák after running a marathon.

OK, if you are like most of my friends, you are reading this thinking, “This guy is a nut!” I might very well be, but as a musician and a runner I have always been drawn to the idea of getting outside of my comfort zone and not being afraid to fail. One of my favorite quotes is from Winston Churchill: “Success is going from failure to failure with no loss of enthusiasm.”

Success is one of the hardest things to measure when you play a concert or when you run a race. In fact, there are all kinds of similarities between soloing with an orchestra and running a marathon. You train or practice for months ahead of time to get ready for the “big day.” Some days feel wonderful and others horrible.

Finally the day comes and you are out there doing it and can’t quite believe it’s really happening.

Then you finish, usually asking yourself what part of any of this was a good idea and vowing to never do it again. But then—magically—a few hours later, you are remembering only the good parts and already thinking about the next chance to play a concerto or run another marathon.

So once the decision was made to merge my two passions, I began to train and practice in earnest. July and August were pretty easy, as it was my summer break. But once school started in early September, I often had to decide if I was going to run or practice on a given afternoon. Fitting in the usual weekly miles for a marathon is hard enough, but with a family and job and impending Dvořák performance, it was a challenge to find time for 40–50 miles a week.

Finally the weekend of the Big Day arrived. I had prepared as best as I knew how. Two weeks before, I had even run 18 miles, showered, ate, napped with my four-year-old son, and then played through the whole Dvořák. It had felt great!

On the way to Bismarck I stopped by Minneapolis, where I picked up a lifelong friend, Michael Center, who was joining me for the weekend. Mike is an accomplished cellist and would be in the cello section for the concert. He would also be there to help me get through the long day.

In the rehearsals for the Dvořák, I loved finally getting to play a piece I had heard most of my life. Like many other cellists, I had worked hard on this concerto as a student and then had only gotten to play it for orchestra auditions, just the first page, behind a screen, for a committee of peers. But rehearsing now, I started to feel free of scrutinizing ears and enjoyed the support of the orchestra and the sheer beauty of the music.

But wait! Was running a marathon going to mess all that up? That was my biggest fear the night before the race. Was the Bismarck Marathon too much to bite off?

I woke the next morning to a perfect day, which put me in a wonderful state of mind. The marathon began at 7:30 with the sun shining, and the temperature perfect for running. The course was flat and scenic throughout. As I went, I met many other interesting runners, including a man who was about halfway through his quest to run 50 marathons in all 50 states in one year! And you thought I was crazy!

I ran the first half of the marathon fairly strong but then slowed down a bit for the second half to make sure I had enough mojo to play the Dvořák the way I was hoping to. I finished the marathon in just under four hours, and was met by my friend Mike as well as Beverly Everett, the conductor of the Bismarck Symphony, who had run the half marathon that morning. Crossing the finish line of a marathon always feels amazing and I was thrilled that part one of my day had gone well. But now I was in need of food and rest.

We headed back to the hotel where a shower and lunch brought me back to the land of the living. I napped a bit and then played some cello, which felt great. I felt relaxed and confident that I could play my best that night.

It was an incredible feeling warming up backstage to not feel the nerves affecting my body the way they normally do before a big concert. I think the endorphins were still swimming in my system from the run, and I was genuinely excited to go onstage and play one of my favorite pieces of all time. I had joked with a few musicians that I was mostly worried about falling asleep onstage during the long orchestral introduction before my first entrance.

Beverly and I both wore our finisher shirts from the marathon, and once we were out there, I felt at home. The introduction started, and for the next 40 minutes or so, I was lost in a world of beautiful music that made me forget the pain in my legs. The Dvořák Concerto is filled with nostalgia and I found myself thinking about old friends and dear family members and times in my life that I could never go back to. I held onto the penultimate note of the piece as long as I could get away with, knowing that soon, this too would become a moment to look back on and cherish.

All that remained was the long drive back to Iowa City. While driving, I thought a lot about why I did this “musician’s biathlon” and if I was successful. I know I won’t be breaking any records for my marathon running, or playing the Dvořák Concerto with any major orchestras, but I did something unique and meaningful to me. And I am still enthusiastic about running and performing on the cello.

So maybe Winston Churchill was onto something. Isn’t it really all about pushing yourself and, at the same time, loving the journey?