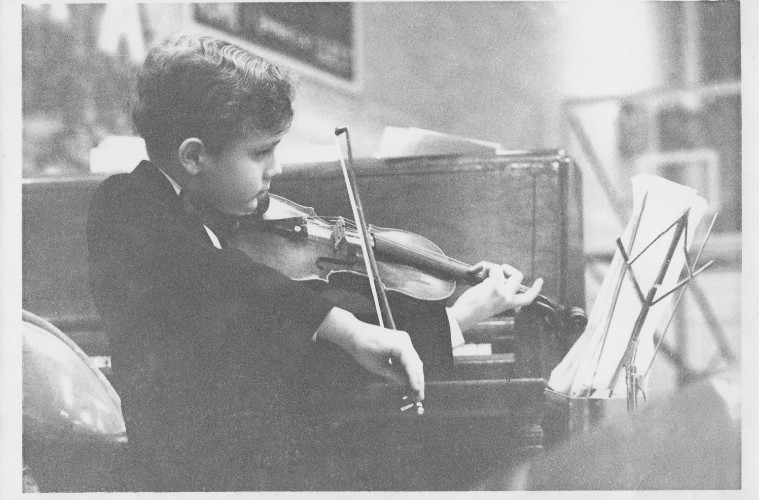 The story of my musical life in Boston begins with my first teacher, Alfred Krips, the former associate concertmaster of the Boston Symphony Orchestra. I marched into his home on a June day, at the age of seven, to play a two-octave scale and the eight-bar theme of the New World Symphony, only to be told that he didn’t take beginners. “Take this book” he said, handing me a thick volume that started with whole notes and ended with complicated double-stop études. “Come back to me after the summer, and I will assign you a teacher.” After the summer, the book duly conquered, he accepted me as a student.

My grandmother was Stella Roman, a famous soprano who sang the title role at the premiere of Die Frau Ohne Schatten under the baton of Richard Strauss at La Scala. I also had an amazing father, who languished in solitary confinement for six months in a Romanian prison, sentenced to be executed for “anti-communist activities,” only to escape in 1947 and mere months later be accepted into Harvard Medical School.

I always felt I had a lot to live up to.

Fortunately, Boston’s Symphony Hall, where I saw such fiddlers as Leonid Kogan and David Oistrakh dazzle the crowd, has served as a home to me since my early years. It’s where I performed the Beethoven Triple Concerto at age 11 and the Brahms Concerto at 12 with local orchestras.

It’s also where I played my debut performance of Sarasate’s Zigeunerweisen with the Boston Symphony Orchestra at age 13 as a youth-orchestra competition winner, and where, at age 15, I performed Sarasate’s Navarra with the Boston Pops under the former conductor Arthur Fiedler. Later in life, performing the Beethoven, the Korngold, and the Bruch Concerti with the Boston Pops only reinforced the amazing privilege of standing on that stage.

As an orchestral musician, I am never content laying low, and Boston gives me the opportunity to challenge myself. Here I can perform the Beethoven Septet with the Boston Symphony Chamber Players, made up of BSO principal players; give master classes on Paganini’s 24 Caprices and Ysaye’s sonatas at the Tanglewood Music Center; perform the complete ten Beethoven sonatas at the Goethe Institute in a three-concert series; and play all six Bach Sonatas and Partitas in one concert. Perhaps this desire to stretch myself comes from my training with Joseph Silverstein and Jascha Heifetz.

Nearby Tanglewood, the BSO’s summer home in the Berkshires, has afforded me some wonderful opportunities. It is both a performance venue and a training ground for musicians on the verge of a professional career. Each year, 190 orchestral and chamber-music players, composers, conductors, and vocalists are awarded fellowships and work with the same conductors as the BSO. The year I was there as a fellow, I won the Pierre Mayer Memorial Award for “Best String Player,” and trumpeter Wynton Marsalis won the “Best Brass Player” award. I remember him saying, “Hey Vic, wanna come jam with me?” as he sauntered down the hall to perform for Leonard Bernstein in a room in the Miss Hall School, where the fellows are housed for the summer.

The level is very high.

One of my all-time favorite musical experiences was also provided courtesy of Tanglewood. In a Tanglewood concert, violist Michael Zaretsky and I performed “Madrigals” by Martinu, who was composer in residence at Tanglewood in 1946. John Williams, who admired the work, was attending the concert, and as a result wrote a piece for us: “Duo Concertante,” a 14-minute, three-movement work. Giving the world premiere was a wonderful experience, and being in John’s studio, watching as he contemplated every note and worked with us to make changes, is one of the highlights of my musical life.

The Boston music scene, with the Boston Symphony Orchestra as its anchor, is a wellspring of musical innovation. Creativity flows in every direction with its numerous chamber-music organizations, and innovative performances in modern music, ancient music, theater, and dance. I am only too happy to be a part of it. As a child, the warm sound of the BSO entranced me: It was a sound that has its roots in a 1919 musicians’ strike when 30 musicians were replaced by then-music director Pierre Monteux. There is a distinctive French warmth and glow that still resonates today. I feel that had a lot to do with my love and pursuit of music. I’ll never forget a performance by a quartet from the Boston Symphony, and I now participate in community chamber-music concerts, where BSO players perform all over the state.

Boston has a strong commitment to music education, and the collaboration between Harvard and the BSO, called the “Insight Series,” is a good example of that ethos. The series marked the 400th anniversary of Shakespeare’s death with a month-long series of events, including roundtable panel discussions and chamber-music performances in order to “deepen audience engagement” with composers, conductors, and performers. All the works programmed were inspired by Shakespeare. As part of the event, I performed the four movement, 15-minute-long solo violin and piano suite by Korngold, “Much Ado About Nothing” on the Symphony Hall Stage. Another educational gem, housed at Symphony Hall, is Project STEP, which provides year-round classical string training for minority musicians, and populations typically underrepresented in classical music. It is funded by 24 foundations, including the National Endowment for the Arts. Young people are given free training from the best artists in Boston. Michelle Obama recently presented Project STEP the National Arts and Humanities Youth Program Award at the White House. Before Project STEP, BSO musicians visited schools that needed stronger music programs through the Godparent Program. The visits occurred over a period of a year to work with students, and introduced them to all aspects of music.

I have always felt very much at home in Boston. I remember sitting in the last row of the floor of Symphony Hall as a young child, surrounded by concert goers in tuxedos, yelling for six or seven encores. It was an event—it was life.

Maestro Nelsons has everyone in the audience on the edge of their seats, and works the orchestra into a frenzy of excitement and verve. The sound of the orchestra, if I may say so, is indescribably great.

This organization is the oldest continuously performing organization in the country. Founded in 1815, it actually commissioned a piece from Beethoven, although Beethoven died before it could be completed. The sound of the group, all with original period instruments, is absolutely amazing.

3. A Tanglewood concert, from the lawn

Listening to the sound of the Boston Symphony waft past while seated on the grass under the stars is unbeatable.

There are so many excellent players who play in local chamber-music ensembles, and enterprising people who have organized them into a series format, often involving great visiting artists.

5. July 4th: Pops on the Esplanade

Pure Boston. Almost everybody, no matter how seldom he or she indulges in Boston’s classical-music scene, comes out for a day of revelry, assembling by the masses, for an event topped off by a Boston Pops performance amid fireworks.