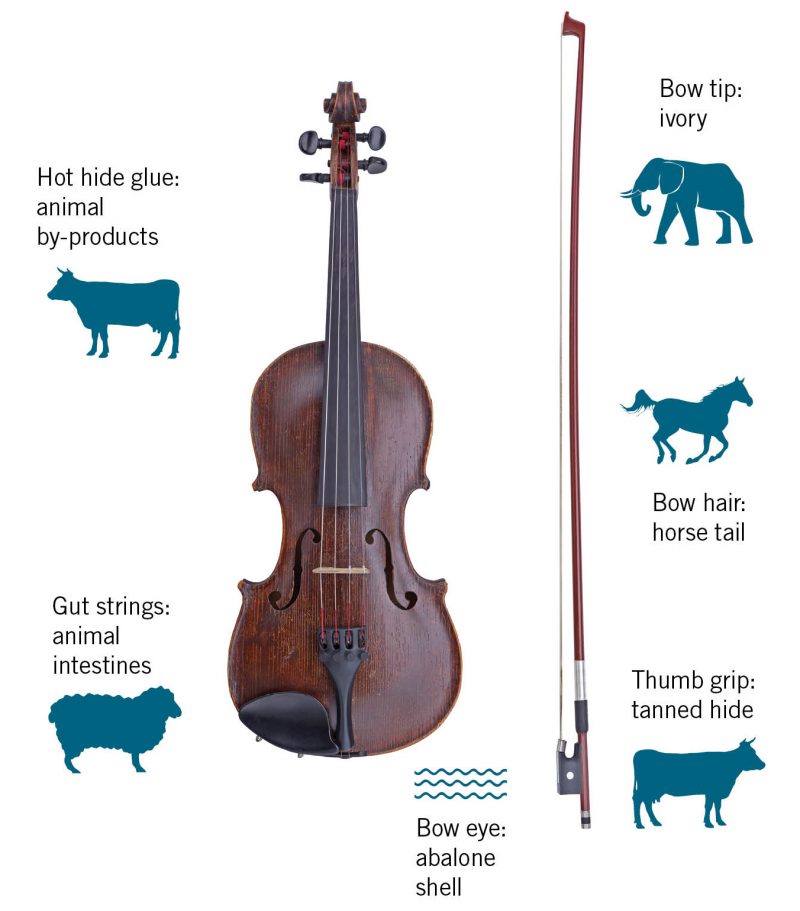 The Search for the Vegan Violin

“I am the worst vegan ever because I play cello,” writes a guilt-laden blogger (aka veganeurotica), who goes on to list the animal parts in her instrument. For musicians who struggle to have a life free of eating or using animal products, using instruments and bows made of animal parts is a dilemma that requires some players to seek alternatives or even consider the possibility of giving up playing entirely.

Players who identify as vegan can seek support and advice for alternatives online and can find community and advice on sites and forums for fiddlers, vegans, and even animal-rights groups like PETA, which has a portion of its website dedicated to musical instruments.

But the answers aren’t always black-and-white when it comes to using an instrument and bow decorated and held together by animal-based products. Finding a comfortable, moral gray area can be a challenge and mean compromise for those who want to continue playing.

Hide glue, a product derived from the skin, bone, and tendons of slaughtered animals, can be a real sticking point for vegan string players. Hide glue primarily comes from horses, but also fish and rabbits. It’s been the adhesive of choice for centuries for lutherie assembly as well as for repair work.

For instruments made of wood, there doesn’t seem to be a suitable synthetic alternative. Chemical-based glues, such as carpenter’s or white glue, are out of the question—these glues can cause irrevocable damage to a wooden instrument because they create a strong bond that does not yield the way that hide glue will.

Though not animal friendly, one major advantage of hide glue is that it acts like a pressure release system, ensuring that when the instrument experiences a big temperature or humidity change, the seams will pop open instead of cracking the body’s wood. Because hide glue is water soluble, it’s also infinitely easier and saferfor a luthier to remove the instrument’s top in the case of a major repair or restoration. At this point, we seem to be stuck with the animal-based product. To forgo hide glue would mean playing on an instrument made of a synthetic, like carbon fiber, which can be glued together with epoxy, or perhaps going electric with a solid-body fiddle.

Gut strings, as the name implies, are made of animal intestine, usually sheep or cow. Here, options are readily available, with a wide choice of synthetic-core strings. While the man-made counterpart may not sound exactly like natural gut, many players find that this is outweighed by more stable intonation, shorter break in time, and longer life.

Bows also present a challenge for vegans. The typical bow may contain such animal products as horse hair, mother-of-pearl, bone, and leather. Mother-of-pearl, which comes from abalone, is often used to decorate the bow eye, button, and slide. Leather is a common thumb grip, and in some bows there could be authentic whale-bone wrapping. On many of the better bows, ivory or mastodon bone (the former being a subject of considerable controversy due to the increased poaching of elephants) is traditionally used for the tip plate and occasionally for the frog.

The options? Plastic or metal tips for the head of the bow can be used in lieu of mastodon or ivory, while rubber or synthetics can replace a leather thumb grip. There are even new plastic substitutes to take the place of mother-of-pearl.

Vegans also can run into trouble when dealing with bow hair. The grizzly truth of horse-hair harvesting is far different than what most players imagine. While many assume that the hair is gently cut from the tail, leaving the horses unharmed and sporting a plucky new ’do, the reality is that most horses are slaughtered: their tails removed for the hair; their hides used for glue. Several companies offer synthetic bow hair, though players may feel the quality of the synthetic hair is not on par with the natural horse hair to which they’re accustomed. [Editor’s note: The rough texture of horsehair holds rosin more readily than the smooth texture of synthetics.]

Dr. Ioana Galu, currently a visiting assistant professor of music at the College of Wooster in Ohio, has been a mostly raw-vegan for the past 11 years. Like many vegan string players, her instrument studies began long before her conversion to a cruelty-free lifestyle. In an effort to align her career with her way of life, Galu has been experimenting with synthetic options for her violin and bow.

“I already play on synthetic-core strings, and several years ago I experimented with great synthetic bow hair made in Germany,” she says. “It felt smoother than the horse hair, and I liked how humidity and temperature didn’t change the way the bow behaved. Natural horse hair always loosens up in great humidity and shrinks in dry conditions.”

Andrea Whitt, a violist for country-superstar Shania Twain, and a practicing vegan, takes a balanced approach to the issue. “It gets to a point where you have to draw the line somewhere,” the Los Angeles–based musician says. “I understand some glues used to hold the wood together are derived from animals, but I still wear leather shoes, so it would be hard for me to justify having an issue with that. If given the option, yes, I would opt for a vegan bag instead of a leather bag or even a fiddle made without any animal by-product in the glue, but I won’t beat myself up over it. It’s all about drawing the line where you feel comfortable.”

The venerable craft of violin and bow making has relied on tradition and standards of practice for over three centuries. But just because the luthiers of yore used animal-based products, who is to say this won’t change in the future. As natural resources disappear, there will be greater reliance on man-made materials, which can be exploited for advances in string instrument making. For now, each player must decide on his or her level of commitment to a cruelty-free life. Will it be refusing to use anything made from animals, including a traditional instrument; avoiding animal by-products only when there is no other choice; or trying to get the best sound even if it means an animal died for the cause. Whatever the case, “move on with heightened awareness,” advises Dr. Galu.

Luis and Clark manufactures a carbon-fiber option for the entire violin family. Designed by cellist Luis Leguia of the Boston Symphony Orchestra, the instruments have a distinctive black finish and are used by string players ranging from Lindsey Stirling to Yo-Yo Ma.

Carbon-fiber bows can be had from a number of makers including Arcus, CodaBow, Presto, to name a few. When choosing a model, make sure that bone, leather, and shell parts have been replaced with metal or a composite. While most bows come with real horse hair and leather thumb grip, CodaBow is one company that will substitute synthetic materials on request, or you can swap these out yourself.

If you can’t find horse hair that’s been humanely harvested, one option might be Hervex synthetic bow hair from Dunlop.

This article was originally published in Strings’ October 2014 issue. Products mentioned in this article may no longer be available and/or new products may have since come on to the market.

Play Bach Better by Improving Your Fifths on Violin