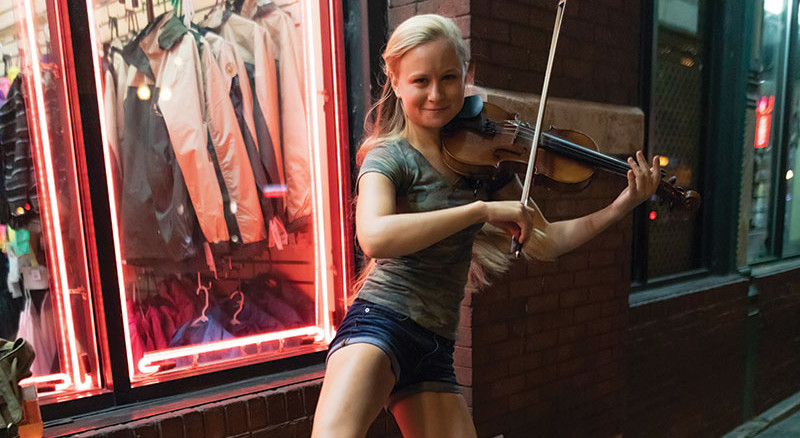 To really understand what Hillary Klug is doing, imagine a doctor who has figured out how to do brain surgery and deliver babies simultaneously. Or an artist who can paint a masterpiece with her right hand while sculpting another with her left.

Or maybe it’s easier to make your way down to Lower Broadway in Nashville, where buskers entertain passersby as they weave from one honky-tonk to the next. Follow the sound of her doing a clog dance on a small platform she brings to her gigs, and the keening fiddle. That’s where you’ll find Hillary Klug, long blonde hair swaying to her rhythm, a beaming smile mirroring the joy of performing classic American fiddle repertoire—and performing it well.

If you can’t make it to Music City, check out her debut, self-titled album. Instrumentation is minimal: Just Klug on fiddle and feet, plus occasional guitar and body percussion from one of her mentors, a five-time Tennessee State Fiddle Champion. The material is traditional—“Bonaparte’s March,” “Cotton-Eyed Joe,” “Cluck Old Hen”—plus one original, “Le Petit Chat Gris.” Her playing and her clogging radiate exhilaration, each sub-rhythm, staccato scratch, and long melodic line impeccably etched.

Born and home-schooled in Fayetteville, Tennessee, raised by parents who weren’t particularly musical, Klug nonetheless felt the call to dance. In childhood she would turn on the radio, then dance and even choreograph in front of a full-length mirror. At age eight she joined a clogging class. Her future seemed focused on clog and buck dancing until the day she heard some friends playing fiddle at a music festival, after which she began to play as well.

In the years that followed, Klug took lessons from buck dancer Thomas Maupin, studied fiddle with Jim Wood, and drew inspiration from fiddlers Kenny Baker, Parker Smith, J.T. Perkins, and Benny Thomasson. She participated in competitions for both skills, winning the National Buck Dancing Championship and Kentucky State Dance Competition in 2013. But she didn’t combine the two disciplines until one day, when she was teaching a dance class.

“The key is to lock onto the rhythm through both the fiddle and the steps, rather than one doing double-time.”

“I needed slower music for my students to be able to practice,” Klug remembers. “But I couldn’t find any recordings of slow fiddle music. So I brought my fiddle and played it myself. The next week I played another tune. We started getting faster with each class until I was able to dance and play at the same time, out of necessity.”

A year later, after driving 75 miles into Nashville to take part in the Grand Master Fiddler Championship, Klug realized the trip cost more than she’d expected. “Parking was, like, 20 bucks each day for two days. I didn’t know if I’d even be able to break even. But I knew that busking was a thing on Broadway, so I took my fiddle and played for 15 minutes. Nobody wanted to hear it; they just kept walking.

“Then,” she continues, “I started dancing. I had my cowboy boots on. And everybody stopped. It was astounding. I got a $20 tip from somebody right away. That’s how I discovered that doing both together is very entertaining.”

The key is to lock onto the rhythm through both the fiddle and the steps, rather than one doing double-time. And for Klug, finding an effective blend also means allowing herself some freedom in how she draws from different fiddle styles. “People in old-time music usually isolate one type from another, like, ‘This is Kentucky style. This is West Virginia–style’. To be traditional, you have to play it exactly the way everyone plays it. They’ll play the tune note-for-note, scratch-for-scratch.

“But I don’t do that,” she clarifies. “I am not a purist. With recordings and radio and just going to fiddle competitions, you hear so many styles and can be influenced by so many things. When I listened to the old-time fiddle players, I learned their repertoire but I built on what they did and added to it to find my own style.”

Cross-tunings are essential to that exploration, as Hillary Klug illustrates, with tunings indicated after each track in the liner copy. “As part of this process, I changed some tunes from the keys in which they are traditionally played,” she points out. “For example, ‘Midnight on the Water’ is always played in DDAD tuning, but I took it up a whole step to EEBE for a brighter sound. I also changed ‘Little Grey Cat on a Tennessee Farm’ to A so I could play in ‘calico’ tuning—AEAC#. I also applied calico tuning to ‘Wolves a Howling’; this allowed for some interesting variations which would not have been possible in the traditional AEAE tuning.”

The Realist electric/acoustic violin being Klug’s “street instrument,” she records with her Roth or Juzek, playing with a Daniel Carwile bow on Pirastro Tonica synthetic-core strings. “They’re nice for the money,” she says. “But I wear out strings way too fast to spend more for nicer sets. Sometimes a set doesn’t last even a month because I practice and perform so much. I did just recently discover D’Addario Helicore strings, which are nice for street performing where I break a lot of strings. The Helicores tune right up because they’re steel core; they don’t take time to break in like the synthetic-core strings I prefer for my main fiddles.”

Though Klug remains a fixture in downtown Nashville, she’s planning to take her show on the road in the wake of her album release. Maybe this will involve putting a band together rather than working solo. And she’s thinking about adding vocals to her act, in effect becoming a one-woman triple threat.

What about going even further? A little juggling perhaps? Klug doesn’t think so. But, she says, “I can dance, play, and chew gum at the same time!”

Thinking about doing a little street music? Take a few tips from Hillary Klug on how to prepare, endure, and maybe prosper, too.

1. “I’d recommend bringing a little battery-operated Pignose-type amp, especially if you’re going to sing. It’s very durable. You can throw it on the ground or drag it behind you and it still works great.”

2. “Don’t leave too much money sitting in your case or tip jar because there are definitely people out there who aren’t honest. I’ve never had anybody take money from me, but I have seen people look down at what’s in my case. You’ve got to find a place to put it away when the money starts to pile up.”

3. “Bring plenty to drink so you can stay hydrated and keep your energy up. I work four hours at a time, so if it’s 100 degrees outside, I have to have a gallon of water with me.”

4. “If you have some new material, try it out on the street. Obviously you don’t want to play it over and over again, but you can play it six or seven times over four hours. It’s great practice because you’re on the spot and in front of people but you don’t have the pressure of being on a stage and having to perform for a paying audience.”

5. “Try to play at an intersection instead of the middle of the block, because people have to stop while they wait to cross the street.”

6. “Play by the rules. When someone has been performing every day or every weekend in one spot, that’s their spot. They have seniority there. I would never try to take somebody’s spot while they’re there, but I might play until they show up. And it’s nice to offer them money to play there for a while if it’s somewhere you really want to play.”

7. “Get to know people in nearby businesses. That makes it easier to ask one of them to watch your stuff while you use the bathroom.”

8. “I’ve had folks step on my fiddle case. I’ve had my fiddle and my bow knocked out of my hands. My street fiddle case is falling apart from wear and tear. So don’t use your nicest instruments on the street.”

9. “Have fun! People in the audience will ask, ‘What’s that dance you just did? What kind of fiddle are you playing? Why does it have five strings?’ It’s fun to engage in conversation. Really, that’s what I love about street performing!”