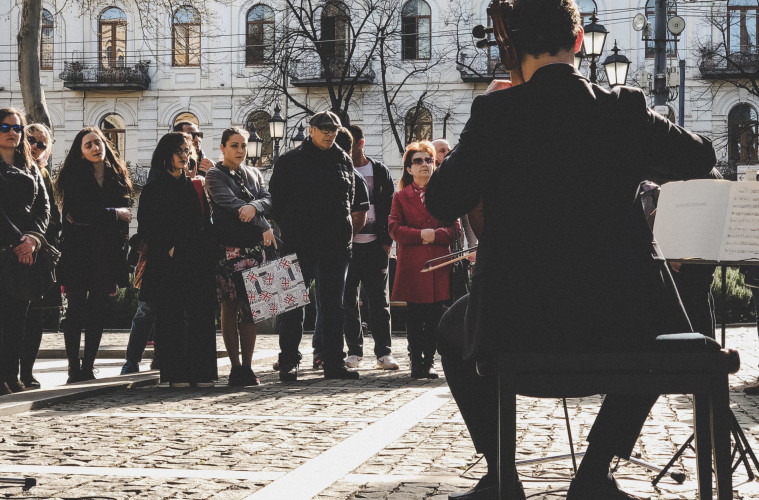 I heard the music before I saw the musicians—a driving, rhythmic, energetic band of ten professional cellists. Outside on this cold but sunny Seattle day, the live music felt hip and novel, which was impressive since they were performing a Brandenburg Concerto Bach composed 297 years ago.

The Seattle Symphony’s Cello Choir was set up on the elevated stage at Van Vorst Plaza, an outdoor venue with equal access for all. The capacity crowd gathered to listen was heartening enough, but it got really exciting when I looked at who was there. This was a truly diverse crowd of regular people, many young, and they were all listening intently, looking happy to be there, obviously digging Bach. This was what it’s all about!

I started Bach in the Subways, a global movement encouraging musicians to present Bach’s music for free in public spaces, in 2010 to get as many people as possible into Bach and classical music—obviously easy for most once they get a chance to hear it live. This year I was celebrating Bach’s 333rd birthday by planning performances on three continents (designated by the hashtag #Bach333). And here at the kickoff was my dream materialized in the most amazing, exciting way!

As the Cello Choir wrapped up and my visit and performance were announced, I was grateful at the enthusiastic reception by both the Seattle Symphony cellists and the audience. Seattle has been a major hub for Bach in the Subways since we started gaining real momentum as a movement. In 2017, the city set a record for the most Bach in the Subways performances, and last March it broke its own record. Not surprisingly, the city holds a special place in my heart.

I got onstage, let everyone know how extraordinary it felt to be back with them all, and played (what else?!) Bach. My #Bach333 journey had officially begun.

Seattle set the tone for the #Bach333 experience, and also reiterated and confirmed the magic I’ve felt since the first note I played back in 2010, when Bach in the Subways was just my solo project in New York. As a child learning cello, I was consistently drawn forward in my work by sharing my music with others. The interaction between the audience and me inspired a kind of musical alchemy that created living worlds of meaning—a sense of connectedness with my fellow human beings that transcended any other communal experience I knew. Never was this feeling more vivid and intense than during my first Bach in the Subways performance—an overwhelmingly positive, expansive sense of inspiration, brightness, and inclusion. This vibrant inspiration compelled me forward, performing Bach in the Subways a few times each week to share with as many people as possible. In March of 2011, I invited other musicians to join me for Bach’s birthday. As I watched in joy, my solo project expanded into a global music movement, and it appeared as though that initial inspiration grew and flowered outside of me to manifest as a living organism in the real world. By March 21, 2015 thousands of musicians had joined me around the planet in sharing this incredible music.

This past March was a confluence of 3s: Bach turned 333; when I started Bach in the Subways, I was 33; and the first Bach in the Subways birthday celebration to go global was three years ago, on Bach’s 330th birthday. 333 felt significant! The same feelings that drove me in the beginning now compelled me to experience this amazing thing in places around the world where it had taken root and flourished. I intended to honor Bach’s 333rd birthday by performing in three cities in three countries on three continents for the March 21–25 global birthday celebration.

From Seattle I headed to Singapore, where the T’ang Quartet first introduced Bach
in the Subways in 2015. Every March since, Lee Yan Chang—pianist, intrepid classical-music lover, and co-founder of the public-pianos organization Play It Forward Singapore—has organized a fantastic array of public Bach concerts. I was greeted at the airport by Lee Yan himself and found myself in a city that seemed impossibly clean compared to my gritty home base of New York. Singapore is a fascinating and beguiling crossroads of cultures and influences.

In the balmy, tropical climate I performed in an expansive covered courtyard in a well-trafficked commercial area. Though there was some concern about the weather since the day started out rainy, it happily dried up and the sun broke through the clouds just as we were to begin. I had the pleasure of performing not only the Solo Suites, but also the Gamba Sonatas with talented local music students. Once again, the warmth, enthusiasm, and diversity of the audience energized and inspired me, and the pure fun of the whole experience was contagious for all.

The third, final destination for the birthday celebration was Tbilisi, Georgia—another fascinating crossroads, and a disarmingly charming, elegant city. There I was greeted by pianist Ana Vashakmadze, who as a high school student in 2015 first brought Bach in the Subways to her city. Every March since, she has organized an impressive series of public Bach concerts featuring music students, professionals, and teachers.

I performed outside the Georgian National Opera Theater on a gorgeous, sunny early spring day. Again a large, diverse, enthusiastic group gathered, and though the location was totally new to me, I felt a surprising similarity in the energy of the crowd to both performances in Seattle and Singapore.

#Bach333 so joyfully reconnected me with my original inspiration for Bach in the Subways, I decided to continue celebrating throughout the rest of the year. In June I brought #Bach333 to Philadelphia, and in September, on the banks of the Ganges River in Kolkata, India, I played Bach as the sun set for an incredibly attentive, appreciate audience. In October, I hit California with three performances in three cities in three days—Los Angeles, Santa Barbara, and San Francisco—and then visited the Netherlands in November. I’ve planned one last surprise location in December.

The unifying sense from all these diverse audiences—the feeling of similarity that made it all so satisfying and hopeful—was a sense of discovery. I could feel it immediately at every performance—a sense of curiosity and wonder. People were there to experience something new, flying in the face of the usual pessimistic assumptions about classical audiences. This music has everything it needs to entice and seduce new audiences; it’s just a matter of giving people the chance to discover (and rediscover) the magic!