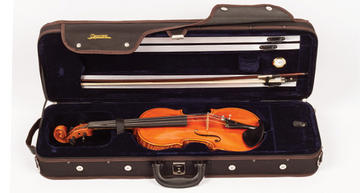 A Trio of Nice New Outfits

With its new Artist series violin outfits, Cremona ups its game in the beginner to step-up set

By Greg Olwell
The low-priced and easily accessible violin outfits from Saga Music’s Cremona brand have been one of the most affordable ways for a student to join the school orchestra. Like many other instruments in that starter-instrument range, tone and playability often took a backseat to affordability. With this in mind, Cremona has approached its new Artist series with a primary focus on tone. It’s an approach that has worked wonders on Saga’s lines of acoustic guitars and mandolins and one that the manufacturer hopes to duplicate in the violin family. Given how many people get their start on the brand’s fiddles, I was eager to see how the focus affected the line’s three new outfits.

To get the point of better sounding and playing violins at affordable, beginner-friendly prices, Cremona’s three new violin outfits—the SV-500, SV-600, and SV-800—took on a higher level of material choice, attentive construction, and finishing and setup.

Each violin has a different look and a few name-brand features—including Thomastik Dominant strings on the two costlier violins, D’Addario Preludes on the lowest cost model, and Aubert bridges all around—that not only help give each instrument an upmarket vibe, but also individual personalities. To give each violin a workout, I invited a local violinist, Lucian Balmer, to our studio to try them out.

Valuing the effect that a different bow can have on a violin, Balmer tried each violin with his personal bow in addition to each outfit’s bow.

First up was the reddish-brown SV-500, which at $280 street, is the lowest-priced outfit in the rejiggered Artist series. It has four fine tuners in the composite tailpiece. As it comes with its factory setup, the action felt a little uneven across the strings, Balmer says, with the E string feeling a little lower and sounding quieter than then others. Overall, the SV-500 is an uncomplicated violin that sounds especially bright on the A and D strings. Still, it is an improvement on what many have come to expect on violins in this price range.

The middle-child SV-600, by comparison, has a more even sound overall and a livelier feel than its less-expensive brother. The lovely orange-ish brown finish highlights the tight-grained spruce top, and flame-maple back and sides add to the SV-600’s vibe of offering a value-focused package that helps to make this violin feel like it could be a worthwhile upgrade for people a little more committed to learning the violin.

The jump to the SV-800 is a considerable one. With its deep lows and smooth, singing highs, the SV-800’s sweet, rich sound is a head above the other two violins. While the lightly antiqued finish won’t fool anyone, it gives this Cremona a lived-in look that many players seek out. Double-stops from the Beethoven violin concerto really came alive as Balmer played and he was impressed with the SV-800’s ease in his hands. And, he adds, the SV-800 has a responsive, full sound that makes it seem like an instrument that costs at least a few hundred dollars more.

Each outfit includes an identical oblong-shaped hardshell case, with a strap and rosin in the accessory pocket, plus a bow and hygrometer. The two lower-priced outfits share the same style brazilwood bow, while the SV-800 has a pernambuco bow with real shell in the slide, and the eyes on the frog and button. Balmer tried each bow with all of the violins and found that the pernambuco bow played a little smoother and brought out more color and tone from each violin. It was as good an argument for the benefits of a bow upgrade as you could make, especially in a budget range.

Individually and collectively, Cremona’s new Artist violins are a step up for the company and for anyone shopping for a first or second violin in a ready-to-play outfit. After hearing these violins played back to back, I found myself lumping the two lower-cost violins together, with the SV-600 improved feel and tone seeming like a real upgrade for only about $100 more. But, the SV-800 is the walkaway champ here. Where the other two would be a good choice for anyone looking for a first or second violin, the SV-800 is a head above them and can carry a player for several years before needing an upgrade. At under $600, it’s quite a bargain.